Lindsay Lohan is planning to extend her stay in the UK following her West End debut in 'Speed-the-Plow' and is looking to land a part in a British film. 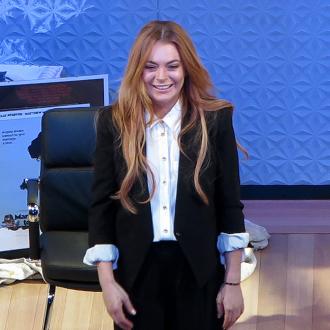 The 28-year-old actress - who is currently starring in the West End play 'Speed-the-Plow - is keen to extend her stay in the UK when the production ends in late November in the hope of being cast in a movie.

She told the Daily Mirror newspaper: ''I would love to do a British movie when I'm finished on the stage. I'm really settled here in London, so it would be great.

''Depending on the script, I'm open to all possibilities.''

Lindsay was recently forced to defend her stage debut after she fluffed her lines in her opening performance last week.

The 'Mean Girls' star is said to have prompted laughs from her audience at London's Playhouse Theatre as she struggled to grasp writer David Mamet's sharp dialogue, but she insists the performance wasn't a ''disaster'' and she is doing her best.

''I respect people have an opinion, but I'm doing the best I can and will for the duration. I'm doing this because working makes me feel happy and this is a new venture for me.''

US-born Lindsay had also previously expressed her concern about the number of lines she had to remember during the second act of the play.

She explained: ''You know, when you think about it, I was doing other things before this, and I was travelling, and I come back and I'm looking at this thing and I'm like, 'Oh f***'. The whole of Act Two, I just speak throughout the whole thing.