Lindsay Lohan barged her way into an Iggy Pop concert earlier this week, after screaming at security guards to ''f**k off''. 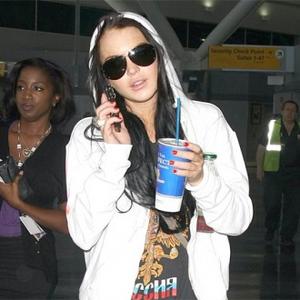 The troubled actress made her way into a Ray-Ban sponsored event with a large number of friends after swearing at door staff to let her in.

A source told the New York Post newspaper: "She crashed at 9:30 pm and demanded to be let in, even though the venue was closed.

"She started arguing with the security guy and screaming for him to 'f**k off'. Finally they ushered her in through the side door."

Onlookers believe the side entrance had been prepared for Josh Hartnett to arrive, and party organisers were further left annoyed by Lindsay's large entourage of 30 guests.

Another source told the New York Daily News newspaper: "If they expected Lindsay, they certainly didn't expect her to come with that many people. Most celebrities brought one or two guests - her crew was inappropriately large.

"It caused a huge commotion, because the VIP area was definitely not equipped to handle that amount of guests. Event staff were running around like crazy trying to accommodate her."

Not all guests at the concert were so badly behaved in the VIP area - Kelly Osbourne and her boyfriend Luke Worrall were said to be "patient" while waiting to glimpse Iggy on stage.

The source said: "It took her a while to get into the VIP area because everyone was crowding it but she was patient. She and her boyfriend Luke didn't have the best view once they got inside, but they craned their necks like the rest of the crowd."

Lindsay was reportedly shunned by the other celebrities at the show - which took place to promote a new range of designer sunglasses created by Iggy for Ray-Ban - including Kate Bosworth and her rumoured boyfriend Alexander Skarsgard.

The spy added: "It's fair to say that the other celebs ignored Lindsay. She's not someone who people are trying to be associated with right now."