Lindsay Lohan is among a host of stars including George Clooney and Steven Spielberg who have been invited to the White House Correspondents' Dinner on Saturday (28.04.12). 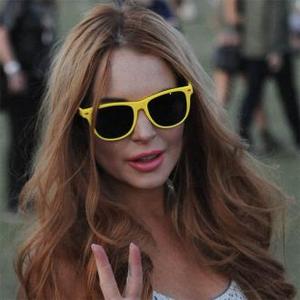 Lindsay Lohan has been invited to the White House Correspondents' Dinner.

The 'Mean Girls' actress is among a host of names to be asked to attend the event - which is held yearly to celebrate the work of journalists and is hosted by President Barack Obama - including George Clooney, Josh Hutcherson and Charlize Theron which takes place on Saturday (28.04.12).

Director Steven Spielberg, actress and singer Zooey Deschanel and 'The Help' star Viola Davis are also expected to be at the dinner.

Lindsay - who recently confirmed her return to acting work playing the late Dame Elizabeth Taylor in biopic 'Liz and Dick' - is a guest of Fox's Great Van Susteren and will be accompanied by her long-term lawyer Shawn Chapman Holley.

Kim Kardashian and her mother Kris Jenner are also guests of the Fox network.

Jimmy Kimmel will be providing the laughs as the comedian hosting the event, and he recently revealed he would be making jokes about the ''glut of dumb things'' said by people in the public eye.

He said: ''I will feast on stupid comments. There seems to be a glut of dumb things being said.''