Veteran Actress Lily Tomlin Felt Uncomfortable Returning To Film Her Tv Show Grace And Frankie After She Was Nominated For An Emmy Award Because Her Co-star Jane Fonda Had Failed To Land A Nod. 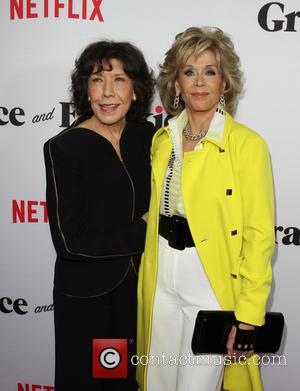 The 9 to 5 star scooped a nomination for Outstanding Actress in a Comedy Series for her role as Frankie in the show when the shortlist was announced last month (Jul15), but Fonda, who plays Grace, was snubbed.

Tomlin admits she felt awkward going back to work afterwards, telling Britain's Guardian newspaper, "Oh I didn't like that. It made me feel itchy. Jane was totally wonderful. The crew would tease me, 'Oh, here she comes, the Emmy nominee!' Stuff like that. That makes it much easier. But I was a little uncomfortable. Dammit! I just don't want it to happen that way. But maybe she'll get nominated next year, I tell myself. I hope so... I told her I would (bring her on stage if I won). I don't expect to win - there's just too much competition."

Tomlin is up against comedy stars Amy Schumer, Amy Poehler, Edie Falco, Lisa Kudrow and Julia Louis-Dreyfus for the award. The winner will be announced on 20 September (15).