'Downton Abbey' actress has landed the titular role in Kenneth Branagh's 'Cinderella', a live action adaptation of the traditional fairytale. 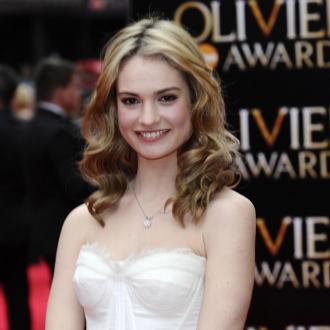 The 'Downton Abbey' star is set to portray the iconic princess in Disney's live action adaptation of the traditional fairytale, joining the lines of Cate Blanchett as the princess' evil stepmother.

The film - penned by Chris Weitz and pitched by Aline Brosh - will be helmed by 'Thor' director Kenneth Branagh, who is to be joined by 'The Hunger Games: Catching Fire' producer Allison Shearmur, 'Jack Ryan' producer David Barron and Simon Kinberg.

James - who takes the spot after 'Harry Potter' actress Emma Watson was originally pursued - plays Lady Rose MacClaire in the third season of the popular ITV period drama 'Downtown Abbey' and has other credits including 'Wrath of the Titans' and 'Fast Girls'.

Other candidates who were in the running for the titular role included 'Atonement' star Saoirse Ronan, 'Anna Karenina' actress Alicia Vikander and 'The Three Musketeers' star Gabriella Wilde.

Disney gave the go-ahead to the fantasy film after the success of its 2010 live action adaptation of 'Alice in Wonderland' and they recently gained victory with their movie 'Oz the Great and Powerful'.

Production is scheduled to begin later this year for a 2014 release date.