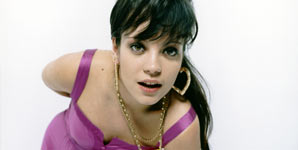 If you haven't already heard of Lily Allen – where have you been? Lily's infectious pop has been causing a stir since she first started posting her tunes on MySpace – and now her album 'Alright, Still' is due out on 17th July, preceded by this fabulous single on 3rd July.

Lily Allen is the 21 year old strange glint in her eyes singer/writer who has been tearing up the web at a rate of knots. When she was a young girl- "I was very lonely actually. I went to 13 different schools so never had time to make enduring friendships. Music became a lifeline to me".

Born in Hammersmith, Lily grew up fast. "I listened to punk, ska and reggae when I grew up, courtesy of my parents' record collections. We moved around London – Shepherds Bush, Bloomsbury, Islington, and I absorbed all the music around me.

Lily finally left school at 15 when it became obvious her creative needs were not being met. Lily signed to Parlophone in December.

Lily Allen - Somewhere Only We...