Lily Allen doesn't have a problem with stars like Miley Cyrus dressing provocatively because she thinks the singer is in complete control of her image. 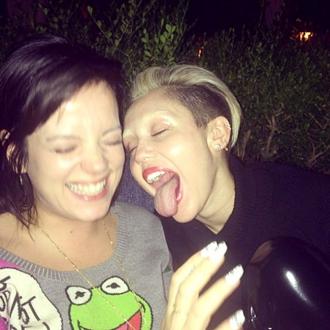 The 'Hard Out Here' hitmaker believes stars like the 'Wrecking Ball' singer are in control of their provocative appearance and thinks the former 'Hannah Montana' star is right to show off her ''banging'' body because she has worked so hard on her physique.

She told France's NRJ Radio: ''I actually think Rihanna and Miley in particular are [being sexy] because they want to do it. I don't think someone sat in a room with Miley Cyrus and said, 'Right you're going to be sexy, stick your tongue out and wear bikinis.'

''She wants to do that, she's got a banging body. She's worked out in the gym all the time, she wants to show it off, that's great.''

However, Lily finds it ''offensive'' that some record company executives can encourage female artists to cultivate a sexy image.

She said: '' 'Hard Out Here' was a comment on the state of the music industry where women are concerned. As a woman that works in this industry, if I want to be sexy and take my clothes off, I'll do it of my own accord.

'' It's when somebody tells you to do it that I find it offensive. If you were a record company person you'd never ask a boy to take his top off.

''I just don't want someone saying to me, 'You've got to lose 50 pounds or take your clothes off to sell records', because it's not true.''