British Pop Star Lily Allen Fled A Showbusiness Party In Tears Over The Weekend (19-20sep15) After Reportedly Arguing With Her Ex-boyfriend Seb Chew. 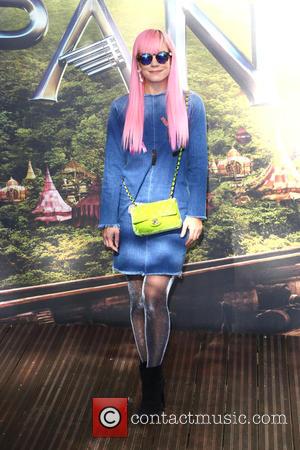 The Smile hitmaker attended a London Fashion Week bash on Friday night (18Sep15) but stormed out in the early hours of Saturday (19Sep15) after the heated bust-up, according to British newspaper The Sun.

Photographs show the singer wiping tears from her eyes as she walks along a street after leaving the Alexander Wang party, where she had earlier stepped into a DJ booth to spin the decks for revellers.

Editors at The Sun report Allen, who is married to construction boss Sam Cooper, left after a furious argument with Chew, who she dated in 2007.

A source tells the publication, "Lily was having a really good time with Seb and her good friend (British rapper) Skepta. She kept wandering from group to group, she seemed to have been drinking. Then suddenly she flipped and was in tears while leaving... Seb was furious with her and they'd clearly had a fight. He was in a busy street shouting down the phone to her."

The report comes amid ongoing rumours that Allen's four-year marriage to Cooper is in trouble.