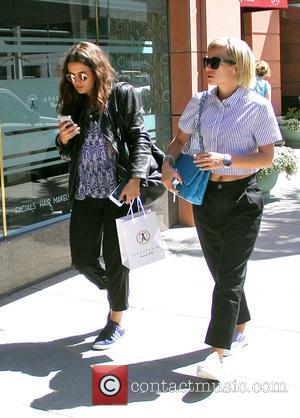 Picture: British pop singer Lily Allen was spotted out and about sporting a new cropped, blonde hairstyle while she also bared her midriff in a crop...

On Monday (30Mar15), the hip-hop mogul relaunched the company as the world's first artist-owned subscription music service, which promises to be a "better experience for both fans and artists", with the backing of stars including his wife Beyonce, Alicia Keys, Nicki Minaj and Madonna.

Allen has now raised concerns over the app in a series of posts on Twitter.com, admitting she is worried that music-lovers will turn their backs on official streaming sites and return to illegal downloads if major artists sever ties with companies such as Spotify, which offers a free service as well as a subscription, to join more "expensive" Tidal, which costs $19.99 (£12.50) a month.

She writes, "I love Jay Z so much, but Tidal is (so) expensive compared to other perfectly good streaming services, he's taken the biggest artists... Made them exclusive to Tidal (am I right in thinking this?), people are going to swarm back to pirate sites in droves... Sending traffic to torrent sites. Up and coming (not yet millionaires) artists are going to suffer as a result.

"I think I may have spoken too soon, and that there is a lot to celebrate where Tidal is concerned, I won't delete my posts because... my concerns are genuine..."

Allen believes the real problem with sites such as Spotify is not that streaming is free, but that record label bosses do not pay their artists a fair share of the proceeds, adding, "(We are) not (paid well), but that's because the labels take their market share and then determine how to divide it between their artists... We could just strike till (until) the labels give us our fair share of streaming revenue..."

Artists have not yet announced if their material will be exclusive to Tidal. Taylor Swift's back catalogue, which she removed from Spotify last year (14) in a dispute over revenue, will be available on Jay Z's service.