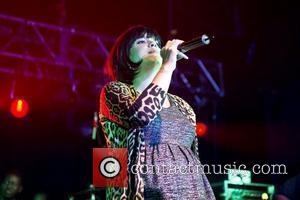 Singer Lily Allen is "responding well" to treatment for septicaemia following her hospitalisation on Friday (05Nov10), according to her spokesperson.
The British pop star was taken ill at her home in Gloucestershire, England, where she had been recovering from the tragic miscarriage of her son last month (Oct10).
Doctors diagnosed her with septicaemia, which can occur when foetal material left behind in the womb after a miscarriage becomes infected.
She is believed to have been given a course of antibiotics and is battling back to health.
Her publicist Murray Chalmers says, "Lily Allen is back in hospital, where she is being treated for septicaemia.
"She is responding well to treatment and her condition continues to improve. Lily thanks everyone for their messages of support and again asks that she and partner Sam Cooper be left alone while she recovers."
Allen also suffered a miscarriage in 2008.