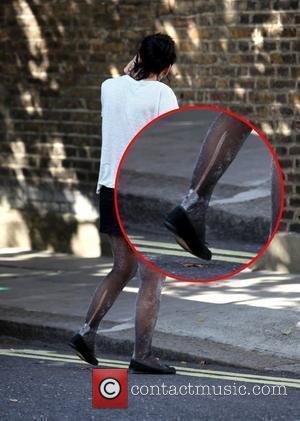 Picture: Lily Allen wearing a pair of worn, glittery tights while out and about in London London, England - 25.09.09

British pop star Lily Allen lit up Paris on Friday night (23Oct09) - flouting French laws by smoking on stage.
The Smile singer played at the city's Le Zenith venue but refused to comply with the country's anti-tobacco rules by chain-smoking her way through the set.
French politicians outlawed smoking in public places, including bar, cafes and concert venues in 2008 and Allen's slip could leave her facing a fine of up to $617 (£411), while bosses at the venue could be made to pay out up to $1,028 (£685).
Allen has previously professed her love for cigarettes, admitting she doesn't want to kick the habit any time soon: "I love smoking. I don't really want to say it... but I do."