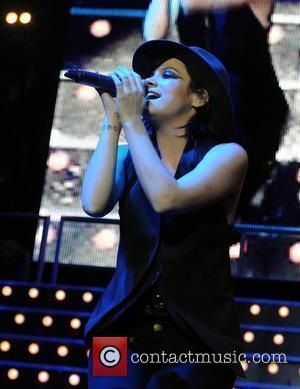 Picture: Lily Allen performs live at the O2 Arena after being forced to cancel concerts last week due to laryngitis and bronchitis Dublin, Ireland - 08.12.09

British pop star Lily Allen will start the New Year (10) in a new home after reaching a deal to buy a $2.08 million (£1.3 million) house in the English countryside.
The Smile singer, 24, has put her three bedroom home in north London up for rent and is preparing to move to the Cotswolds, an area popular with stars like supermodel Kate Moss and Blur rocker Alex James.
The country retreat boasts five bedrooms, an outdoor heated swimming pool, horse paddocks and a stable yard.
Allen is expected to put pen to paper to seal the deal in the coming weeks after wrapping up her world tour with U.K. rapper Dizzee Rascal, reports British newspaper The Daily Mail.
The move will take Allen closer to her actor father Keith Allen, who recently purchased a $1.04 million (£650,000) farmhouse in the Cotswolds.