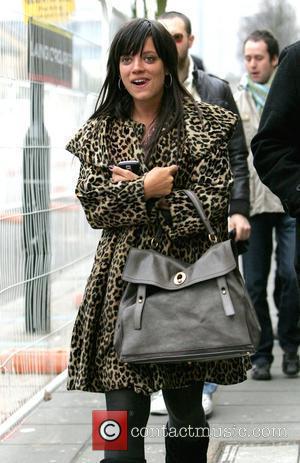 Picture: Lily Allen steps out with her band-mates to have lunch at a Thai cafe London, England - 07.01.09

British pop star Lily Allen has launched a savage attack on the private equity group which owns her record label - accusing the firm of "killing" the creativity of the talent under its charge.
The Smile hitmaker is set to release her second LP, It's Not Me, It's You, with EMI later this month (Jan09), but insists all is not well at the label since capital group Terra Firma took over in 2007.
The move saw a string of highly important artists walk away from the recording giant, including Sir Paul MCCartney, Radiohead and the Rolling Stones.
Last year (08), British rockers Supergrass also left EMI-owned Parlophone after 12 years, while singer Robbie Williams went on "album strike" over discrepancies with his label's new owners.
And Allen, who recently slammed EMI for failing to fork out money for decent hotels when she was on promotional duties abroad, admits she hates her new bosses - and is convinced the equity firm will fail EMI.
She tells The Word magazine, "It's really sad for EMI. I hate Terra Firma. They're w**kers and they don't know what they're doing. They will fail. They don't know how to run a creative business. They are killing us, frankly."
It's not the first time Allen has hit out at Terra Firma bosses - she blamed them for stalling production of her second album after they cut 2,000 jobs when they first took over EMI.