Supermodel Lily Aldridge Has Landed The Honour Of Strutting Her Stuff At The Annual Victoria's Secret Fashion Show In A Luxury $2 Million (£1.25 Million) Jewelled Lingerie Set. 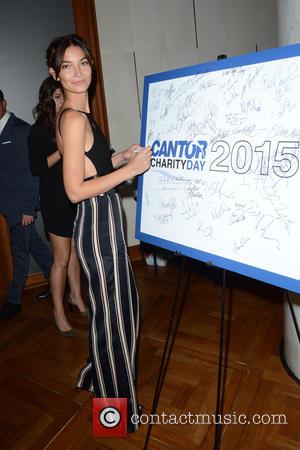 The runway stunner, who is married to Kings of Leon star Caleb Followill, will follow in the footsteps of previous Victoria's Secret Angels Tyra Banks, Gisele Bundchen and Heidi Klum when she dons the Fireworks Fantasy Bra, which features over 6,500 gems set in 18-karat gold.

The news was announced via Instagram on Monday (02Nov15).

"I can't believe it's finally been announced," Lily gushed as she unveiled an image of herself modelling the sexy underwear. "Thank you so much @VictoriasSecret... for this amazing honor!!!!"

Lily will showcase the bejewelled bra, which took designer Mouawad over 685 hours to complete, on the runway in New York City on 10 November (15), when model Gigi Hadid will be among the new Angels joining the show. Rihanna, Selena Gomez and The Weeknd will provide the entertainment by performing at the 20th anniversary event, which will be broadcast in the U.S. on 8 December (15).

Lily Aldridge Treats Herself To Salmon Meal Before Every Runway Show

Lily Aldridge bulks up on salmon before a Victoria's Secret show

Lily Aldridge Found Out Mother Was Playboy Model At 12