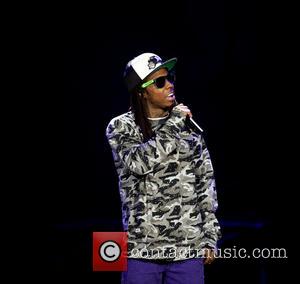 Rappers Lil Wayne and Snoop Dogg, rocker Flea and comedian Kevin Hart are among the stars who have waded into the debate over allegations a U.S. basketball team owner was caught on tape spewing racist remarks.

Donald Sterling, the owner of National Basketball Association (Nba) team the Los Angeles Clippers, hit headlines following the emergence of an audio clip which features a man, believed to be the business mogul, voicing a number of inflammatory racial slurs.

The tape, which was published on Tmz.com, sparked a flurry of debate on Twitter.com, with a number of stars giving their opinion on the story, including Red Hot Chili Peppers rocker Flea, who urged the Clippers to boycott an upcoming game in protest.

He writes, "Forfeit tomorrow's game as a protest against Donald Sterling, and the city, the nation, would rally by your side... Even I, who has always been against the Clippers would root for them to win it all, if they forfeited tomorrow's game to protest Sterling."

Fellow hip-hop star Snoop Dogg also weighed in on the controversy by recording a foul-mouthed video message expressing his disgust, saying, "A message to the racist motherf**cker that owns the Clippers. You b**h as*, redneck, whitebread chicken s**t motherf*cker. F**k you, your momma and anything connected to you. F**k you."

Comedian Hart vowed to boycott the basketball team in future, tweeting, "The owner of the Clippers is a flat out racist and will never see a dime of my money!!! Donald Sterling is disgusting... this s**t is sad," while retired basketball legend Magic Johnson, who was mentioned in the tape, promised the same, adding, "Tmz reported this morning that Clippers owner Donald Sterling doesn't want me or other African-Americans to come to Clippers games... (my wife) and I will never go to a Clippers game again as long as Donald Sterling is the owner."

Others to comment on the controversy include L.A. Mayor Eric Garcetti, who urged the Nba to take action, and U.S. President Barack Obama, who called the alleged comments "incredibly offensive" and "racist".

Nba officials have since vowed to launch a probe into the incident, saying via a spokesman, "We are in the process of conducting a full investigation into the audio recording obtained by Tmz. The remarks heard on the recording are disturbing and offensive, but at this time we have no further information."

A statement from the Los Angeles Clippers, on behalf of Sterling, adds, "We have heard the tape on Tmz. We do not know if it is legitimate or it has been altered... Mr. Sterling is emphatic that what is reflected on that recording is not consistent with, nor does it reflect his views, beliefs or feelings... He feels terrible that such sentiments are being attributed to him and apologises to anyone who might have been hurt by them."