In 2012, Lil Wayne made an announcement: he would officially retire from hip hop in coming years, due to having four children and wanting to spend more time with them during their younger years. His career has attracted a strong following thus far and has managed to win him 4 Grammy awards, out of 15 nominations yet his new single, 'Krazy', is unlikely to live up to that level of critique, however. 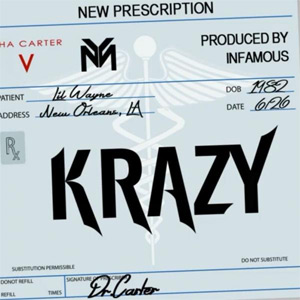 After joining Cash Money Records in 1991 at the age of nine, Dwayne Michael Carter, Jr. has spent 23 years in the hip hop world. One would think that, in that time, a person would be able to learn that words like 'soap' cannot (or should not) be awkwardly forced to rhyme with words like 'code'. Perhaps in this time, a person would also expand their vocabulary enough to not rely on using the 'n word' 18 times in a single song.

DJ Infamous handled the production of 'Krazy', perhaps owing to the rather generic beat which resonates throughout the entire track, steadily convincing you that you are suffering from tinnitus. This abhorrent chirping is coupled with a rhythmic thumping of drums and base, unfortunately making the 'music' the best part of the track.

Wayne is able to put a commendable amount of feeling into his rapping and the style of each verse changes just enough to keep it sounding interesting, however the 'hook' is a horrible disappointment. Not only does Lil Wayne drop the last syllable of each word for no apparent reason, but it also makes you long for other, far better tracks like 2009's 'Drop The World'.

With such a long history working in hip hop, Lil Wayne is letting people down if the rest of his final album, 'Tha Carter V', is as migraine-inducing as this song. It isn't, however, as 'Belong' ft. Drake, the first single released for the album, is far less obnoxious. 'Krazy' is not the culmination of 23 years-worth of work, it is a soulless, indistinguishable, interchangeable track that sounds like it was thrown together over a long weekend.