Lil Kim "Thrilled" To Be Pregnant But Vows To Remain "Hardcore" 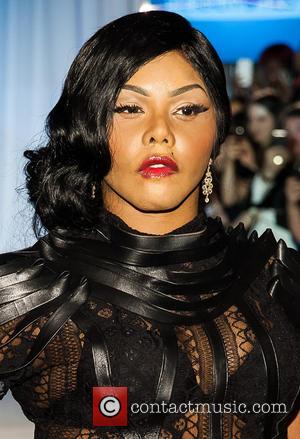 Lil Kim made the pleasant surprise of announcing her pregnancy in New York City on Wednesday (Feb 12th).

It became pretty clear that the 39 year-old was pregnant when she hit the New York Fashion Week sporting a rather large baby bump.

She then addressed this while onstage at the Blonds Fashion Week after-party, singing 'Lighter's Up,' in a tribute to Biggie Smalls.

"It's also going to be Biggie's birthday and the anniversary of his death soon so we [as she points to her belly] love you."

However, the Brooklyn-born rapper isn't planning on taking anytime off during the pregnancy as she then said, ''I'm still going to work. I'm still going to be hardcore, the baby has made me even more of a beast!''

But before taking the stage and attending the event, Kim spoke to Us Weekly about becoming a first time mom.

"I'm so excited, overjoyed! In heaven, waiting for my little sunshine," she stated.

"I can't wear corsets and all my favorite sexy clothes [anymore]," Kim joked of how her infamous style has altered. "But it's a very beautiful thing and I'm so thrilled."

The Grammy-Award winning artist also affirmed, "I'm still going to work. I'm going to be a working mom! New music and all that."

Kim wanted the baby's father to remain private for the time being but on Thursday afternoon, shortly after the pregnancy news hit the headlines, the mystery man's identity was revealed.

Mr Papers' twitter account, who coincidently calls himself 'Daddy', has also been retweeted congratulatory tweets all day, thus confirming he is the father of the unborn child.