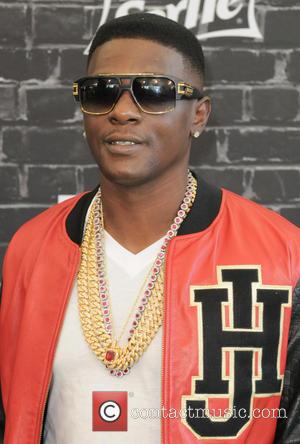 Rapper LIL' BOOSIE's rhymes are to be used against him in court as he fights charges he hired a hitman to kill a rival.
The hip-hop artist, real name Torrence Hatch, is due in court in Louisiana next week (beg30Apr12) on a first-degree murder rap, and his own words could be coming back to haunt him.
A judge has ruled that prosecutors can use his lyrics as evidence in the trial - to highlight the accused's mindset.
Reports suggest the track 187 is likely to lead the prosecutors' case; the hit begins with the line: "Any n**ga who ever tried to play me, they dead now."
On Tuesday (24Apr12), Judge Mike Erwin ruled that specific words from the track can be used as evidence against Boosie - but the record cannot be played in court and verses and lines cannot be read out.
Lil' Boosie, who is currently incarcerated in Angola prison, is charged with hiring Michael Louding to kill Terry Boyd in 2009.
Louding has confessed to his involvement in the murder, and he told Baton Rouge detectives that the rapper paid him $2,800 (£1,750) to kill Boyd.