The War Of The Worlds: The New Generation New Deluxe Double Album Out November 26th 2012

Posted in Press Releases on 05 November 2012 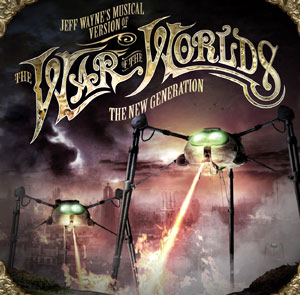 The War Of The Worlds: The New Generation New Deluxe Double Album Out November 26th 2012

The War Of the Worlds: the New Generation NEW DELUXE DOUBLE ALBUM out NOVEMBER 26TH 2012

"Across the gulf of space, minds immeasurably superior to ours regarded this Earth with envious eyes, and slowly, and surely, they drew their plans against us."

In 2012, an all New Generation of artistes will guest on a fresh recording of one of the most iconic albums of all time.  Originally released in 1978, Jeff Wayne's Musical Version of The War of The Worlds remains an award-winning landmark masterpiece that has continually won new fans, spending over 330 weeks on the UK chart to date, reaching No. 1 in 11 countries and selling over 15 million copies. Now, Jeff has embarked on a new interpretation with guest stars every bit as talented as their illustrious predecessors.  He has once again brought HG Wells' classic novel to life as a new deluxe hardback 2CD album, digital download and special double vinyl (its original format) with lavish 52 page booklet and poster.

Two of the modern era's most respected artists, Oscar-nominated actor Liam Neeson and celebrated singer/songwriter/producer Gary Barlow will play the two key roles of The Journalist and The Sung Thoughts of The Journalist. Gary will be the new voice of the two international hit singles The Eve of The War and Forever Autumn. A life-long fan of the original album, he was most excited at the chance to appear on the new one. He says:

"I've been a huge fan of The War of The Worlds score since I was a kid, so to be asked to work with the legend that is Jeff Wayne was a real privilege."

Thirty-four years on, Liam Neeson inherits his role from Richard Burton, whose voice is an abiding memory for a generation haunted by his album narration. While a hard act to follow, he definitely makes the role his own.

"I knew and loved the book from when I was a teenager and it was an easy persuasion. And I bought the album in 1979 when I was working in Ireland. I still have that little cassette."

Ricky, fresh from a world tour with the Kaiser Chiefs and Closing Ceremony triumph at the Olympic Games, takes over from David Essex's classic rendition as The Artilleryman.  It is a brand new challenge for the rock star who grew up listening to Jeff's album.  Ricky commented:

"Jeff Wayne's The War of The Worlds is part of the musical landscape and I have always been a fan. It is daunting to do because people love it so much. I got the email from Jeff Wayne inviting me to be part of it and that is not something you can say 'No' to."

Liam is already announced in the 3D holographic role of The Journalist for The New Generation Arena Tour, which hits the UK at the end of November 2012, alongside Ricky Wilson who will play The Artilleryman in his first ever stage role.

Bringing a fresh sound to the role of Parson Nathaniel is acclaimed new singer Maverick Sabre. Originally performed by Thin Lizzy's Phil Lynott, Maverick performs with Joss Stone, the stunning choice to play Parson Nathaniel's wife; their performances on The Spirit Of Man are truly mesmerising.

Hot new talent, Alex Clare, following his breakout hit Too Close, takes over as The Voice of Humanity,  originally recorded by Chris Thompson.

The New Generation Cast of Characters: