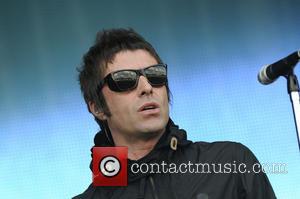 Liam Gallagher couldn't resist having a dig at his estranged brother and former Oasis bandmate Noel as he took the ALS Ice Bucket Challenge on Friday (22Aug14).

The rocker braced himself for his icy blast while seated on a scooter after nominating Spongebob Squarepants and Ivor the Engine as animated heroes he would like to see doused in freezing water for the cause.

He then added, "And while we're on cartoon characters, Noel Gallagher."

After the bucket of water was tipped over his head, Gallagher muttered "F**king c**t!" It is not clear whether this was aimed at his brother or the man who iced him.