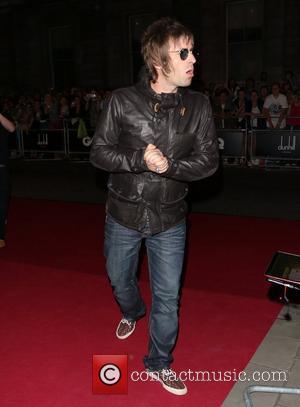 Liam Gallagher may have just turned forty, but that by no means meant that the Beady Eye rocker is readying himself to settle down as he had a massive blow-out to celebrate the landmark 40th birthday.

The only thing that signalled any change in Gallagher's self-assigned bad boy image was his birthday suit - a black tuxedo complete with bow tie - quite a change from his usual unkempt look. Although, he did do his best to make the black tie attire a little more Gallagher-esque, by untucking his shirt and giving the waiting paps a mouthful when he arrived with wife Nicole Appleton.

The festivities, which was sponsored by vodka brand Ciroc, was attended by a few close friends and family as well as a few famous faces who showed up. Nicole's sister and fellow former All Saints singer sister Natalie and her husband Liam Howlett of The Prodigy were there as was TV presenter Holly Willoughby.

The ex-Oasis frontman, a lifelong Manchester City fan, had invited the whole squad over for the gathering, however given that it came less that 48 hours before their Sunday kickoff with Arsenal, few could make it. Star striker Sergio Aguero had sent the rocker a birthday message on Twitter, but couldn't make the event, although Mario Balotelli did make an appearance at the event, being one of the only familiar sky blue faces at the bash.