Liam Gallagher would love to make a traditional Irish folk album - but he doesn't think it will happen because the recording sessions would turn into a booze up. 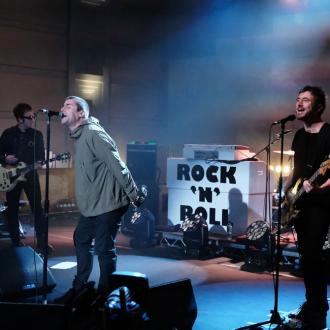 The former Oasis star - whose mother Peggy hails from County Mayo in the West of Ireland originally - has revealed he's considered putting together a whole record to honour his roots and even spoke with his former bandmate, Paul 'Bonehead' Arthurs, about recording an entire record of Gaelic tunes ''years ago''.

However, the 'Wall of Glass' hitmaker admitted it would be impossible to get done, as the Irish love a tipple and he sees it turning into a ''p*** up''.

''So would it actually happen, even if we planned it?

''We wouldn't get much done.

''But me and Bonehead spoke years ago about doing that.

It was at a small Irish bar in County Mayo, in 2015, that Liam played an impromptu set, which ended up going viral on the internet, and led to him launching his solo career two years later with his debut solo LP, 'As You Were'.

He played the acoustic guitar and sang the song 'Bold', after ''30 pints of Guinness'', at J.J. Finans pub.

The 'Wonderwall' singer recalled: ''We were driving through the town and I go 'would you look at that lovely pub.

''There's no such thing as just having one.

''Then someone gets the guitar out and before you know it, you're thinking that you can f***ing play it!''

His brother, Paul Gallagher, added: ''We'd been out all day for about eight hours and that's a long time to be drinking Guinness.

''You can tell which way it's gonna go!

''Someone gives him a guitar and the rest is history. He sings his song 'Bold,' someone records it and it went viral around the world.''

The song ended up on platinum-selling 'As You Were'.