Liam Gallagher has carried on his feud with Robbie Williams, saying he would rather shoot his own private parts than follow advice from the 'Goin' Crazy' hitmaker. 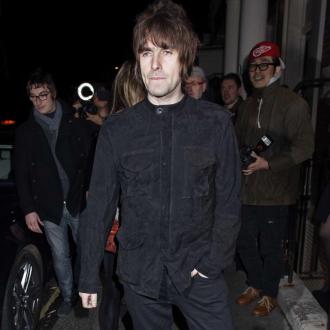 Liam Gallagher says he would rather shoot himself in his manhood than follow Robbie Williams' advice.

The former Oasis frontman has carried on his feud with the 'Goin' Crazy' hitmaker - who recently insisted Beady Eye's new album 'BE' would be ''f***ing amazing if [the songs] had a chorus'' - by saying he isn't inspired by anyone, let alone the Take That star, and doesn't even own an iPod.

Liam - who recently called Robbie a ''f***ing fat f***ing idiot'' - said: ''We didn't make a record to satisfy some requirements, this was our project. Robbie Williams said the record's good but the songs have no chorus. I'd rather shoot myself in the balls than follow his advice.

''I do not listen to other music, so I don't get my inspiration from anybody else, but maybe I should buy an iPod.''

Liam also blasted supermarkets who refused to stock copies of 'BE' because it featured a semi-naked picture of photographer Harry Peccinotti's wife lying on her back with one of her breasts exposed.

Speaking to Italian newspaper Il Giornale, he said: ''Everyone has nipples, they could have put tape on it if they had to.''

Liam and Robbie have been feuding for almost 20 years. The pair first fell out shortly after the 'Angels' singer partied with the rocker and his brother Noel Gallagher at the 1995 Glastonbury festival.

Liam previously threatened to break Robbie's ''f***ing nose'' after Robbie sent Oasis a wreath after listening to their panned 2000 album 'Standing On The Shoulder of Giants'.

Robbie has also clashed with Noel, who famously branded him ''that fat dancer from Take That''.