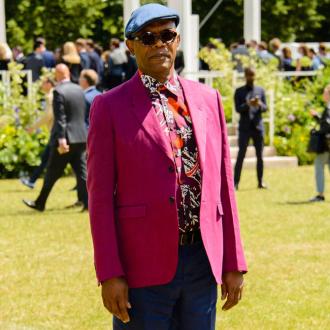 A dedicated follower of fashion, the 'Pulp Fiction' actor chose a shocking pink blazer and blue baker-boy cap as his daytime attire before changing into a dazzling white suit for the night - when he was spotted hanging out with formula one racing driver Lewis Hamilton at the GQ after-party.

An orchestra accompanied the catwalk show at Burberry, while stars were entertained by skater boys in slippers and suited men on BMXs at the Jimmy Choo show.

Renowned for his red-sole stiletto - the popular designer opted to display his sports hybrid shoe collection which included the likes of peppermint brogues that were modelled by a gang of skating professionals.

Sandra Choi, the label's director, told The Times newspaper: ''The man on the street is a liberated man of action. The only rule that counts when choosing what to wear is that it has to be both fit for purpose and a true expression of your personality.''

And Paul Smith followed trend by enlisting a freestyle stunt cyclist who balanced atop a scaffolding installation while dressed in a suit by the London designer.