British Formula One Ace Lewis Hamilton Was Left In The Dust As He Took Part In The Final Leg Of The Gumball 3000 Rally On Friday (29may15) After Running Out Of Petrol In The Middle Of Nevada's Death Valley. 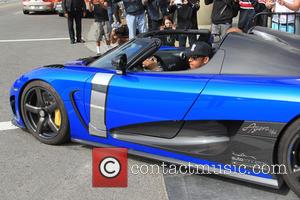 Picture: Lewis Hamilton - Lewis Hamilton joins the Gumball 3000 Rally on route to Death Valley where he is driving a Koenigsegg Agera S worth £1.2...

The professional racing driver joined fellow celebrities, including Baywatch icon David Hasselhoff, action man Dolph Lundgren, rocker Tommy Lee and model Tyson Beckford, on the road for the trek from Los Angeles to Las Vegas, but Hamilton found himself at the back of the pack as his supercar's engine stalled due to a lack of fuel, less than four hours into the drive.

Another rally participant was able to come to his rescue and give him some gas, allowing Hamilton to head to a scheduled pit stop in Death Valley.

The Gumball 3000 crew will cross the finish line at the MGM Resorts Village in Sin City later on Friday (29May15).

The epic rally kicked off in Stockholm, Sweden on Saturday (23May15), with the teams roaring 3,000 miles (4,828 kilometres) across two continents and five countries in seven days.