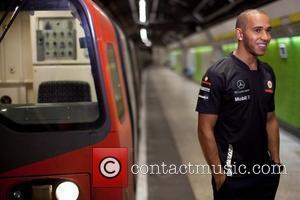 Picture: Lewis Hamilton gets a lesson in tube driving on the London Underground to launch Diageo’s sponsorship of free travel on London Tubes, buses, trams and...

According to a report by The Sun newspaper, Formula 1 racing driver Lewis Hamilton has been busy recording R&B music, in a recording studio that has also been used by Robbie Williams and Kylie Minogue. However, the music that he has recorded is not intended for commercial release but only for the racing driver's own amusement. According to the report, Hamilton had hired out the entirety of the expensive recording complex to ensure that nobody saw him and leaked the news to the press.
If Lewis Hamilton were to release an album of recorded material, he would not be the only Formula 1 racer to have done so. In 2007, Jacques Villeneuve released an album entitled Private Paradise. Hamilton is likely have some knowledge of the music industry, as he dated the Pussycat Dolls singer and X Factor judge Nicole Scherzinger off and on since 2008. In October 2011, it was announced that the pair had broken their engagement and decided to split.
In 2008, Lewis Hamilton was crowned Formula One champion for the first time. Last year, he achieved 5th place. He currently competes for the MClaren team, along with Jenson Button. A number of high profile racing stars and pundits, such as Martin Brundle and Damon Hill, have publicly urged Lewis to focus on his 2012 season in the hope that he can return to his former levels of success.