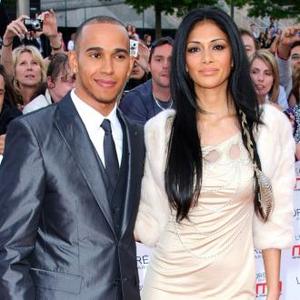 The Formula 1 racing driver insists the couple are ''back on'' after 'The X Factor' UK judge was angry when he spent a night partying with 10 girls.

Lewis reportedly told guests at the Sports For Peace benefit dinner in London, England that he and Nicole have definitely worked things out.

He was overheard telling a friend: ''Nicole and I are happy and together - we're back on.''

The 34-year-old singer was said to be debating whether their relationship could continue after Lewis ended a night out by hiring a £5,000 Penthouse for an after-party.

An onlooker told the Daily Mirror newspaper: ''Lewis seemed keen to reassure his friends that the relationship is anything but over.

''In fact, he was gushing about Nicole and seemed genuinely happy.''

Guests at the bash enjoyed a charity auction, with prizes including an invite to Sir Elton John's Oscars party, tickets for the Wimbledon men's final and lunch with Cristiano Ronaldo.

Bob Geldof and Boris Becker were among other guests at the £2,500-a-head event.