Review of Paper Crush EP by Letting Up Despite Great Faults

When the classy little geographical abbreviation of 'LA' is brought up, Hollywood, rollerblading and The Hills spring to mind. However, LA is a secret music hub, having given us a vast selection of great bands, old and new from The Chillies to Warpaint. It's no surprise thatLetting Up Despite Great Faults also hail from the region and the sunny state just got a whole lot hotter with this record emerging from the undergrowth. 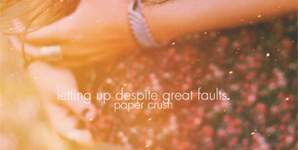 Michael Lee has taken a more electro direction with 'Paper Crush' opposed to the 2009 self-titled full length, which only sees a few dabbles in tracks like 'Folding Under Stories Told.' The electro experiments bring this bang up to date at a time where this electro/shoegaze craze is at rife. All thanks to artists like fellow LA inhabitants done good, Foster The People and the hotly tipped M83. The hushed vocals also give an element of mystery, the words are unidentifiable at points, but it all adds to it. 'Repeating Hearts' has a flawless poppy beat with a noisy entourage of shoegaze-y aura, sounding like a more souped-up Owl City track. This 6-track effort also seems to have some 'emotional' content just judging from the female influenced song names. 'Sophia in Gold' has some elegant synth work, resembling the rhythmic trickle of a waterfall. Instrumental track (bar two lines), 'Aurora' is responsible for the second name drop. 'I Feel You Happen' also not only cries relationship issues but also has a weird scratchy sound and distorted beats, almost, just almost nearly crossing in to dubstep territory in its fast pace.

'Teenage Tide' is the anthem of the EP. The words, 'Are you counting on me to the end? Can I count on you in the end?' are catchy and epitomise teenage freedom. The end warps in a bitty distortion that sounds like your speakers have just muffled themselves off their own accord. The pace picks back up on bonus track 'Helium' to end. Its electro goodness rounds off the 20 minutes of LUDGF wonderfully.

Considering this is the work of one person, it's pretty impressive. The songs are finely crafted, perfected with the look of the hazy album art to give the album a 'cool' feeling, which it fully embraces. Any improvements? Lee needs to allow his vocals come to the forefront of the tracks more. When they're in the background, they can easily be mistaken for some dull reverb. But otherwise, roll on the second full-length album!