Kate Upton dazzled at the Dutch premiere, leaving Leslie Mann and Cameron Diaz's flirtation in the past.

Who knew that a simple, playful grab of a friend's derriere could generate so much gossip! This is what Leslie Mann has been finding out after said incident at the London premiere of revenge comedy The Other Woman. No one else got a look in apart from the three, blonde leading ladies Mann, Kate Upton and Cameron Diaz - especially when Leslie decided to display her fondness for Cameron's leather-clad backside in front of the paparazzi. 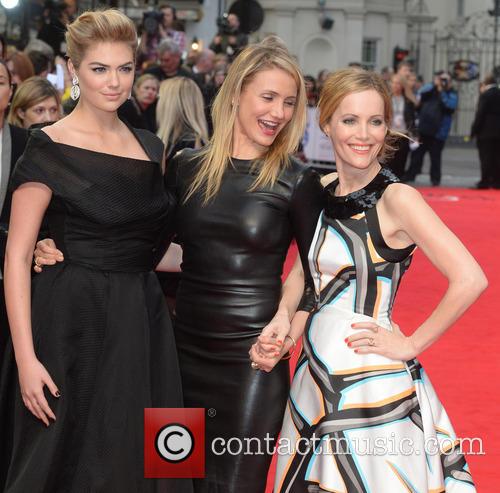 Kate Upton [L] Decided To Make Herself Centre Of Attention After THAT Butt Grab.

Seems like the ever-demure Kate Upton had had enough of her co-stars' flirtation and decided to pull a few classic glamour tricks out of her back to sway the press attention back her way at last night's Dutch premiere of the girls' night giggler. Channelling Marilyn Monroe, the 21 year-old model and actress wore her hair in classic Hollywood curls with a simple yet sexy white Christian Siriano number and nude stilettos.

Mann and Diaz also looked beautiful but found it hard to compete with their bombshell co-star. Or perhaps the actresses had deliberately let the younger star take centre-stage after all their attention-hogging? 41 year-old Diaz eschewed her skintight London leather number for a simple Christian Dior LBD whilst Leslie, 42, opted for a chalky yellow Delpozo dress with a large plaid pattern and some white heels.

Watch The 'The Other Woman' Trailer:

They may be competing for media coverage but the three American stars showed that there's no animosity between them, having been spotted making the most of Amsterdam's unique attractions together. They were also seen being interviewed on a boat as it travelled down one of the city's canals and looked to be genuinely enjoying each other's company. 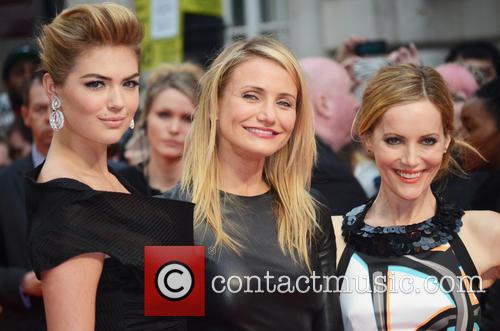 The Other Woman sees Diaz plays a woman who discovers the guy she is dating is married to Mann's character. The pair initially clash in horror at the situation but after spending a little time together, realise they have more in common than previously assumed. As the pair bond, they find out Mr. Cheater, who is played by Nikolaj Coster-Waldau (Game of Thrones), had yet another mistress (Upton).

The discovery of another mistress becomes too much for the cheated three and so they use their infuriating situation to launch a series of revenge attacks designed to teach the cheater a well-needed lesson. The trio recruit a colleague, played by Nicki Minaj in her first live action role, With the wife slipping female hormones into his morning beverages and the joint discovery of the man's fraudulent business secrets, this three-timer is about to realise that leaving a trail of mistresses was a big mistake.

Watch Behind-The-Scenes Footage From A 'The Other Woman' Catfight:

In true The Other Woman style, all three actresses chose fierce, pointed toe stilettos at last night's premiere, perhaps as a not-so-gentle reminder to guys that girls stick together. It's a good job all three actresses are such good friends though, or else it'd be girl wars!

More: Cameron Diaz has spoken out against cheating in a relationship - see what she has to say.

More: Feud alert! What did the disrespectful Nicki Minaj keep doing to Leslie Mann whilst filming?

Expect Plenty of Laughs In Original Revenge Comedy, 'The Other Woman.'