Les Paul & Friends: American Made WorldPlayed, An All-Star Collaborative Cd, To Be Released August 30 By Capitol/Emi

The Best Of The Guitar Legend's Capitol Recordings Reissued

An all-star celebration, Les Paul & Friends: American Made World Played brings Les Paul together with a legion of his greatest fans, all of whom have learned a thing or two from the master and have achieved their own great successes in music. From Eric Clapton to Joss Stone, Keith Richards to Sting, the artists joining Les on the rock-charged album share one clear common bond: Les Paul is one of their most respected and beloved mentors. With advanced arthritis limiting his own ability to shred like the younger guns, and always more of a melodic pluck-and-flutter player himself, Les was happy to set loose his rock & roll descendents on the leads and solos before adding his own signature riffs, trills and staccato exclamations to the arrangements.

On June 7, Capitol/EMM reissued Les Paul with Mary Ford: The Best of The Capitol Masters (90 th Birthday Edition), a collection of Les Paul's finest Capitol recordings, with new artwork, three bonus tracks and a new package essay written by Les Paul. On May 20, Les Paul was inducted into the Inventors’ Hall Of Fame at a formal ceremony at the Hall’s Akron, OH headquarters. On June 9, the evening of Les Paul's 90 th birthday, he was honored with the Songwriters' Hall Of Fame Sammy Cahn Lifetime Achievement Award at the organization's 2005 awards dinner at New York's Marriott Marquis Hotel.

One of the world’s greatest gatherings of guitarists will take the stage for “All For Paul: Les Paul’s 90 th Birthday Salute,” a star-studded celebration presented by Gibson Guitar at the JVC Jazz Festival - New York, at Carnegie Hall on Sunday, June 19. Throughout the next year, Gibson Guitar will issue 12 special edition custom Les Paul guitars to commemorate Paul’s 90 th birthday. Two new Les Paul books arrive in stores this year: The Les Paul Legacy by Rob Lawrence is due from Hal Leonard Publishing on October 27 (ISBN 0634048619). Les Paul In His Own Words, a limited edition autobiography with each numbered copy signed by Les Paul, was released June 9 by Russ Cochran Publishing.

Les Paul, born June 9, 1915 in Waukesha, Wisconsin, is not just one of the world's finest guitarists of all time, but is also a Rock & Roll Hall Of Famer, five-time Grammy Award winner, the inventor of the solid body electric guitar, and the pioneer of numerous enduring studio techniques, including multi-track recording and the use of reverb. His signature Les Paul line of Gibson guitars debuted in 1952 and quickly grew into a family of four models, the Junior, Special, Standard and Custom, all of which became Gibson classics. Gibson's Les Paul guitars, including new custom models from Jimmy Page, Neal Schon and Joe Perry, are universally hailed as the best and are the top choice for many of the world's premier players.

2. Sting, Joss Stone Love Sneakin' Up On You

5. Peter Frampton So Into You

6. Alsou How High The Moon

10. Richie Sambora Let Me Roll It

13. Johnny Rzeznik All I Want Is You

16. Joe Perry & Mick Hucknall I Love You More Than You’ll Ever Know 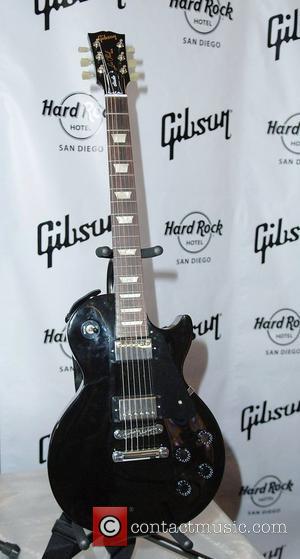 Les Paul Equipment To Be Sold Off At Auction

Les Paul To Be Honoured With A Monument