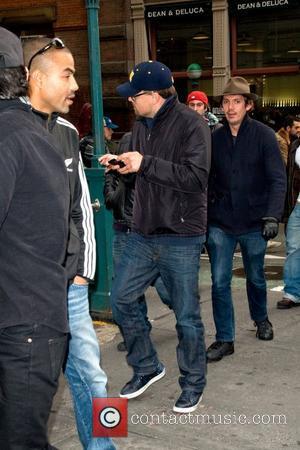 Picture: Leonardo DiCaprio and Lukas Haas are seen out and about in Soho New York City, USA - 11.11.11

It is assumed Leonardo Dicaprio 's turn as Fbi director J. Edgar Hoover could be his best chance yet of scooping the illustrious Oscar for Best Actor, but the Hollywood star won't be without competition come the ceremony on February 26, 2012.
The 37-year-old stars in the Clint Eastwood-directed flick 'J. Edgar', focusing on the private life of the complicated character who headed the Federal Bureau of Investigation for almost 40 years. Released on November 11, the movie received underwhelming reviews but DiCaprio was praised for his portrayal of the complex J Edgar, with Rolling Stone critic Peter Travers saying "Despite being buried in layers of prosthetic latex, DiCaprio is a roaring wonder as J. Edgar Hoover". Irish bookmaker Paddy Power currently has the actor the 7/4 second favorite to land the leading man Oscar in February - he was nominated for The Aviator in 2004 and Blood Diamond 2006 but lost out to Jamie Foxx and Forest Whitaker respectively. Although the nominations are yet to be announced, the Best Actor category is likely to accommodate Hollywood heavyweights such as Brad Pitt, for his turn in Moneyball, and Gary Oldman, for Tinker, Tailor, Soldier, Spy. However, the current favorite and Leonardo's biggest competition is George Clooney, whose role in Alexander Payne's 'The Descendants' is already being talked up as a worthy Oscar winner. The movie had its Los Angeles premiere on Tuesday evening (15 November 2011), ahead of its release this week.
Other actors likely to feature when the nominations are announced on 26 January 2012 are Jean Dujardin for silent movie 'The Artist', and Ryan Gosling for 'Drive'. Steven Spielberg's 'War Horse' is tipped for success in the Best Film and Best Director categories.