'The Wolf Of Wall Street' pair ran into each other in New York.

It seems celebrities are just as easily amused as your average Joe, as proven by Leonardo Dicaprio in a recent paparazzi video. He was seen playing a spur-of-the-moment prank on his good friend and former co-star Jonah Hill in New York the other day, while out with his entourage. 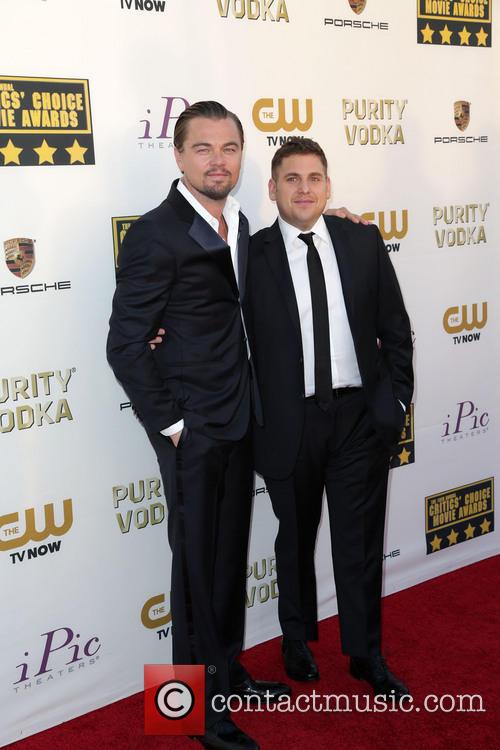 'The Revenant' star Leonardo DiCaprio decided to trick his fellow actor when he spotted him standing alone outside a bookstore on Monday (August 1st 2016). In footage taken by paparazzi, he is is seen noticing Jonah Hill in the street and running up to him with his phone out pretending to be a fan.

Jonah Hill appears to jump out of his skin before realising it's his friend, and he looks away in friendly disdain as Leonardo scoops him into the biggest man hug ever. Jonah is then seen greeting the rest of Leonardo's entourage. Looks like they were keeping the fun to themselves though because when a real fan walked up to the famous duo asking for a photo, they promptly waved him away.

The pair are good pals having starred together in Martin Scorsese's 2013 film 'The Wolf of Wall Street'. It seems like an age away though, with both actors having starred in a number of movies since. Leonardo did 'The Revenant', and Jonah went on to lend his voice to 'The Lego Movie', 'How to Train Your Dragon 2' and 'Sausage Party', and star in '22 Jump Street', 'True Story' and 'Hail, Caesar!' He's also set to appear in the upcoming comedy drama 'War Dogs' with Miles Teller and Bradley Cooper.

It's nice to see Leonardo DiCaprio's name in the headlines for something other than his love life. He's currently been provoking a lot of attention regarding his supposed new relationship with model Nina Agdal, with whom he recently vacated to Mykonos.