Leonardo Dicaprio became the latest victim of prankster Vitalii Sediuk on Thursday night (06.02.14) when the Ukrainian TV reporter dropped to his knees on the red carpet at the Santa Barbara International Film Festival and nuzzled the actor's nether-regions but the 'Wolf of Wall Street' star laughed off the incident. 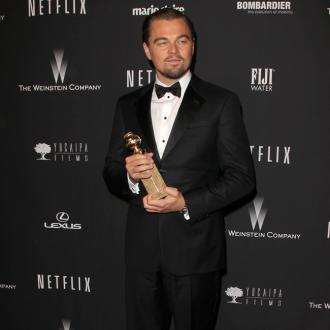 The 'Wolf of Wall Street' star was surprised when the Ukrainian TV reporter, who previously attempted to interrupt Adele's speech at the 2013 Grammy Awards and tried to kiss Will Smith at a movie premiere, rushed towards him and dropped to his knees on the red carpet at the Santa Barbara International Film Festival in California before wrapping his arms around the actor and nuzzling his face against Leonardo's nether-regions for several seconds.

The Oscar-nominee patted Vitalli on the neck and attempted to laugh off the practical joke as he gently tried to free himself from his assailant before the prankster was seized by security and hurled away from the scene.

The 25-year-old journalist, who pulled the same prank on Bradley Cooper and left the 'American Hustle' star red-faced at the Screen Actors Guild (SAG) Awards in Los Angeles last month, was not arrested.

Not all of Vitalii's victims have been amused by his stunts. He was slapped in the face by Will after planting a kiss on his cheek at the Moscow premiere of 'Men in Black III' in 2012.

He also raised security questions when he managed to sneak into the Grammy Awards last year without a ticket and took Maroon 5 singer Adam Levine's unused seat.

Vitalii later made his way to the stage and attempted to interrupt singer Adele as she collected the award for Best Pop Solo Performance from presenter Jennifer Lopez.

The intruder tried to claim the award as his own but was quickly ushered away by Jennifer.