Leonardo Dicaprio was Amanda Seyfried's first Hollywood crush and inspired her to go into acting. 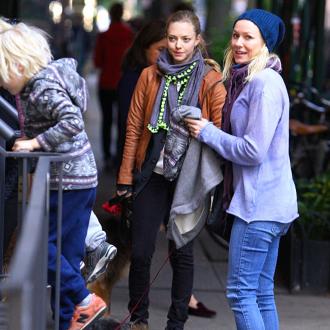 The 28-year-old actress decided to pursue a career in acting after becoming besotted with the 'Great Gatsby' star - who became a teen heartthrob after starring in 1996's 'Romeo and Juliet' and 1997 hit film 'Titanic'.

Quizzed about her first movie crush, she said: ''Leonardo DiCaprio - he made me want to be an actor.''

One of Amanda's highlights of her burgeoning career was performing at the Oscars with the cast of hit musical 'Les Miserables' earlier this year as.

She said: ''Filming in Greece [for 'Mamma Mia!'] and singing at the Oscars were high points. 'Mamma Mia!' was a big break for me, and performing 'One Day More' with me 'Les Miserables' co-stars felt like living a dream.''

Following a breakout role in 'Mean Girls' in 2004, Amanda became a regular on TV series such as 'Big Love' and 'Veronica Mars', and she admits she still loves the medium and is hooked on shows such as 'Breaking Bad'.

She told Teen Vogue magazine: ''My can't-miss TV was 'Breaking Bad' because it was flawlessly written and executed.''