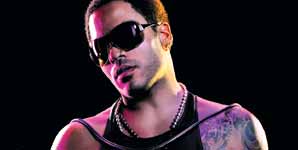 ABSOLUT is proud to announce the launch of ABSOLUT KRAVITZ – a new music project which sees Lenny Kravitz creating an exclusive new track based on his interpretation of the ABSOLUT brand.

'We are thrilled to have Lenny Kravitz with us on our creative journey and in this, our first high-profile music project' says Michael Persson, Global Brand Director for ABSOLUT VODKA. 'Not only is he supremely talented; his output, inspired by so many genres and eras of music, defies categorisation, making him truly individual – a quality which means he is perfectly at home with the creativity of ABSOLUT.'

One of the pre-eminent rock musicians of our time, Lenny Kravitz is an icon whose bold, channelling sound has transcended genre, style, race and class. Over a remarkable 16-year career, Kravitz has managed to do it all with a contemporary urgency rivalled by none. All of his albums have been certified either platinum or multi-platinum. He has also been showered with accolades including MTV Video Music Awards, American Music Awards and four consecutive GRAMMY Awards for Best Male Rock Vocal Performance. Kravitz's appeal has also been recognized by his peers; his collaborative efforts are as varied as his own influences, having worked with Madonna, Slash, Jay-Z, N.E.R.D., P. Diddy and Alicia Keys.

Famous for its creative collaborations with leading world-famous artists and designers, this collaboration marks the first time ABSOLUT has worked with such a well-known figure from the world of music.


"ABSOLUT has had a history of working with great artistic people – like Andy Warhol, Tom Ford, Jean Paul Gaultier, Gianni Versace and Kenny Scharf. I thought it would be interesting to do an artistic collaboration like this and be part of that heritage.", says Kravitz.

Kravitz recorded a new song, entitled "Breathe", in New York, which will be featured in the campaign. Although this collaboration marks the first collaboration with an internationally recognised recording artist, the brief given to Kravitz was exactly the same as the one any world–class artist working with the brand would receive: present your personal interpretation of ABSOLUT and its core values. The result is a track that is a transition from Kravitz's traditional rock and roll to a distinctly dance music sound, with minimal lyrics, a memorable melody and pulsating beat.

Kravitz said that he was inspired by the brand's core values of clarity, simplicity and perfection. 'There's nothing more simple, clear or perfect than the essence of true love,' he says. 'Once I'd felt that, the track just came.'

'The ABSOLUT brand is synonymous with a true and genuine passion for creativity. Using communication technology we are now able to share this creativity and distribute our collaborative artistic work with a global audience" says Michael Persson.


This is the third music project from ABSOLUT. Initiated in 2003, ABSOLUT TRACKS projects has so far presented 7 producers/artists from across Europe creating new tracks inspired by their unique interpretation of the ABSOLUT bottle. ABSOLUT KRAVITZ is the first project that has seen ABSOLUT teaming up with an internationally recognised recording artist. Lenny Kravitz joins the long list of talented individuals – Andy Warhol, Gianni Versace, Damien Hirst and Helmut Lang among them – who have collaborated with ABSOLUT to create exclusive new works.

Lenny Kravitz - Believe In Me

Precious: Based on the Novel Push...