Actress Lena Dunham Felt "Chubby" While Taking The Stage At Friend Taylor Swift's Recent Concert, Because She Was Surrounded By Supermodels Like Gigi Hadid And Lily Aldridge. 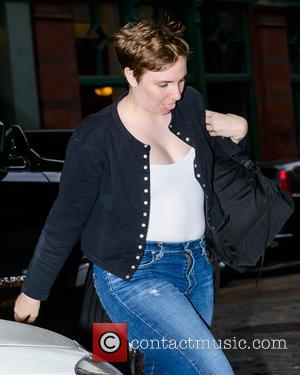 Swift has taken to inviting friends to join her onstage during shows on her current 1989 World Tour, and in New Jersey on Friday night (10Jul15), she attempted to recreate her star-studded Bad Blood video, by bringing Dunham, Hailee Steinfeld, Hadid and Aldridge, who all feature in the music promo, out onstage.

Following the surprise appearance, Dunham posted a photo of herself alongside Swift and Victoria's Secret model Aldridge, joking that she looked like a "drug addicted secretary" or a "7th grade boy who is into tech theater."

Dunham spoke about the experience during a conversation with director Judd Apatow at the Film Society of Lincoln Center in New York on Monday night (13Jul15), admitting that while the experience was unforgettable, she now knows she has no place on the fashion runways of the world.

She said, "I was so thrilled to support my friend and so displeased to learn about the truth of my own height. I've been feeling pretty tall, feeling pretty sturdy, and it was amazing to me, like, 'Oh, I'm not tall, I'm chubby'... On most days, I feel really great and fine about my body, but I don't think standing next to, like, three supermodels or so is anything even the most confident woman needs to do.

"And when I socialise with those women, which I've done a little bit, because they're good friends of Taylor's, who is a good friend of mine, I don't feel so strange. But the minute I caught sight of myself in the Jumbotron (screen), I knew something was very wrong."

But Dunham added she was happy to find the humour in the situation, especially in texts from friends like Apatow.

She added, "I got all these texts from friends saying like, 'I just want you to know you're beautiful', and I was like, 'I didn't ask for that'. You (Judd) were just like, 'That was the f**king funniest thing I've ever seen'.

"And my boyfriend (rocker Jack Antonoff) made it his screensaver, because he thinks it's so funny to just look at the height difference and look at all the people in makeup, and then me."