Veteran Rockers Motorhead Have Thanked Fans For Standing By Them During Lemmy's Health Crisis After The Frontman Finally Made A Return To The Stage Following A Battle With A Lung Infection. 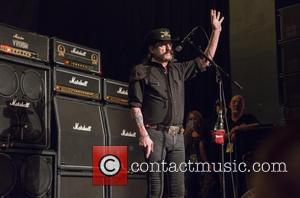 Picture: Lemmy Kilmister - It follows his walk-off last week in Salt Lake City, where the band cited the high altitude as the reason behind Lemmy's...

The band axed a number of shows after the rocker fell sick on tour, initially fearing he had been struck down with altitude sickness and later revealing he was battling a lung complaint.

Lemmy took time off to recover, but made a comeback on Tuesday night (08Sep15) by returning to the stage for a show in St. Louis, Missouri.

After the concert, the rockers posted a number of pictures of the event on the band's Facebook.com page along with a message thanking fans for their support.