Further acts have been announced to perform at this year's Reading & Leeds Festival, as well as a well-desired headliner - Mumford And Sons.

Reading & Leeds Festival goers will be happy to hear the line up for this year has been released, and it is already looking like an incredible weekend for music enthusiasts. The bank holiday weekend of 28th-30th August 2015 will be hosting one of the UK's biggest music festivals. Across the weekend, bands are being plucked up to offer one of the best line-ups for the festival yet. Mumford And Sons will be headlining alongside Metallica this year, four years after their last performance at the festival. They will be joined by Royal Blood, Bastille, Catfish And The Bottlemen, Hannah Wants, Rebel Sound ft. Chase & Status, Rage, David Rodigan and Shy FX, Years & Years, Wolf Alice, and plenty more yet to be announced. It's no secret that Reading & Leeds never disappoint with their colossal line-ups. Royal Blood are one to look forward to, bringing with them an exclusive performance and unique take on drums and bass. Another exciting addition is Chase & Status. After their chaotic performance at Reading & Leeds in 2013, they are back this year with Rage, David Rodigan and Shy FX; guaranteed to be an epic exclusive performance. The group admitted that after their outstanding response from the crowd in 2013, they "can't wait to see what the Reading & Leeds crowd will bring this summer."

After blowing the crowd away at Leeds Festival 2014, Catfish and The Bottlemen, are coming back for round two this year. With their sold out tour around the corner, the bands explosive sound is not one to be missed. The crowd will be raring for "Kathleen" and "Cocoon", as well as the bands truly refreshing fiery vibe.

With 2014 proving an impressive year for dance music, Hannah Wants is a definite showstopper for party lovers. Set to play her hit 'Rhymes', she will live up to her breakthrough DJ of 2014 status.

More: Our Tastebuds Are Tingling For This Year's Hottest New Artists

Others announced to perform are Jamie T, Deadmau5, Wilkinson, Pierce The Veil, Manchester Orchestra, and Jack Garratt. With even more already announced and so many more to be revealed soon, the anticipation is intensifying.

The boss of the Festival, Melvin Benn, commented on his delight about securing Mumford and Sons as headliners, admitting, "Reading & Leeds line-up is already shaping up to be one of the best ever." He also stated that he was, "looking forward to revealing the third headliner and even more great artists soon." We can only sit on the edge of our seats till then, but in the meantime, tickets are available through the Reading & Leeds Festival website. 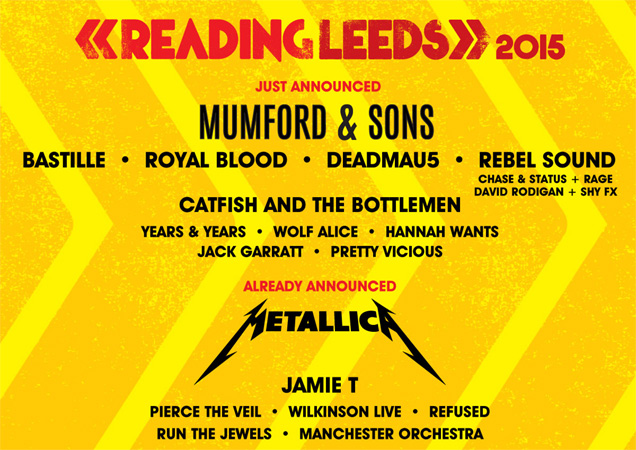 The announcement poster for 2015's Reading and Leeds festivals

Catfish and The Bottlemen