Fresh with the anticipation of a secret appearance by Green Day, hundreds of fans poured into the NME/Radio 1 Stage by eleven o'clock, in the hope that their exploits at Reading would be repeated at Bramham Park that morning. However, there was no such luck and by the time that Post War Glamour Girls took to the stage, some seventy-five people stayed to enjoy their melancholy and deeply textured rock. With a sound not far removed from some of the Smashing Pumpkins more maudlin material, those that remained in the tent were rewarded by an accomplished set by the local four-piece. 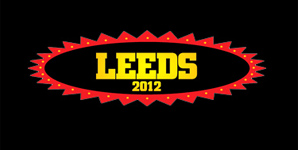 In stark contrast to PWGG, the tent filled out nicely in time for the arrival of former Gallows frontman Frank Carter with his new outfit Pure Love. Clearly enjoying every minute, Frank's enthusiasm translated brilliantly, with one of the most willing crowds of the weekend. It's important to note that, to date, Pure Love have only released two singles and an album isn't due until February 2013. This was a set based purely on Frank Carter's reputation and the band's exploits during the set; an introduction of a dozen Pure Love beach balls and Frank and (guitarist) Jim Carroll playing lead single 'Bury My Bones' from inside (and later on top of) the crowd proved memorable for both parties. Dedicating set closer 'Riot' to his "homeboys in Gallows" more than suggested that he's no longer living in their shadow (as they are no longer under his) and, with both acts in the public gaze, they can only be expected to thrive.

Over on the BBC Introducing Stage, another local outfit in Black Moth were just getting warmed up, female fronted and bringing heavy Sabbath influenced rock to an enthusiastic crowd. A much higher quality than many of the acts on the stage in question over the weekend, the Moth enjoyed vocal support and those in attendance bore witness to a band surely on the rise. Over on the main stage, Hip Hop collective OFWGKTA provided something refreshingly different to the acts appearing over the weekend. Well received and typically controversial, they're still a far cry away from the classics; the likes of Public Enemy and Cypress Hill; but given the reaction from this 21st Century audience, the signs are good.

Heralded by a downpour, Don Broco benefitted from the rain with a packed Festival Republic tent willing to buy into their high-energy tunes. Clearly on the cusp of big things and a debut record arriving to huge acclaim nationwide, their songs translated excellently live and the adverse weather will have helped them gain a whole new fan base. On the subject of high-energy, Canadian punks Billy Talent later arrived in the NME/Radio 1 stage and promptly tore it to pieces. Despite vocalist Ben Kowalewicz being surprisingly quiet in the mix, new singles 'Surprise Surprise' and 'Viking Death March' slotted in effortlessly alongside hits including 'This Suffering', 'Devil In A Midnight Mass' and 'Try Honesty'. By the time they strode into a closing double of 'Fallen Leaves' and 'Red Flag', their status as one of the most consistently brilliant acts in rock today was confirmed.

Next up the bill, Mastodon were an entirely different prospect. Riding high from the acclaimed 2011 release The Hunter, the metal titans brought the tent to its knees with a monolith-heavy display of breath-taking musicianship at an ear splittingly high volume. Easily the band of the weekend, they balanced choice cuts from their back catalogue with a wealth of material from The Hunter. By the time the opening riff of hit single 'Curl Of The Burl' rolled out, the impromptu sing-along was impressive even by the weekend's standards. The penultimate band of the weekend were Hawk Eyes, yet another Leeds act to break through into the public gaze and they didn't disappoint, offering a half hour of the finest music in the North. With a number of Moths and Nuns in attendance, their unique brand of rock brought the BBC Introducing Stage down. This left one band to see out this memorable festival weekend; possibly the best festival band of the 21st Century. Kasabian were suitably amazing, a greatest hits set made better by perfect sound. A romantic nod to Neil Armstrong complete with an orchestral rendition of the ET soundtrack by means of an introduction to 'Let's Roll Just Like We Used To' was one of the many highlights of their career spanning set. Despite the wealth and depth of recent material from latest release Velociraptor, classics 'Club Foot', 'Empire' and 'LSF' were festival highlights in themselves. Strong material backed by one of the most brilliant light shows made for one of the most memorable ever witnessed at the Bramham Park site. By the time the band returned for an encore resplendent in full skeleton costumes, everyone went suitably crazy for mega-hit Fire. A brief a cappella rendition of the Beatles' 'She Loves You' brought the curtain down on another weekend of music unparalleled in its depth and variety for another year.