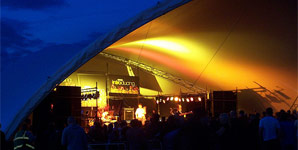 Sunday is the obligatory meat-and-potatoes indie day at Leeds festival, so I set myself the task of finding a few survivors amongst the wreckage of the NME-T4-Radio 1 armada. Bringing a twinge of Americana and delicate post-rock to the indie table are Leeds newcomers I Concur. The BBC introducing stage is bathed in morning sunlight which suits their glacial leanings, and the songs seem to emanate from a peaceful, considerate place and they expertly lull the audience out of their hangovers and into the day.

Lovvers are a perfect wake up call for anyone with a hangover from the night before; short, sharp and precise with little left to debate or insinuate over. Their frenetic post-hardcore repertoire sets the mood for the rest of the day good and proper. As do Black Acid, the latest project spearheaded by Death In Vegas mainman Richard Fearless. Surreptitious drones engulf the Festival Republic arena awash with the legacies of both Spacemen 3 and The Stooges. Heads down, no holds barred rock and roll this most definitely is, but don't apply the shoegazing tag just yet unless it's metal toe-capped boots you're akin to staring down at.

The Joy Formidable are another pleasant aside from the weekend's more-hyped turns, their angular post-Britpop pulling in a sizeable crowd against the more established names (Santogold & The Subways) their timeslot finds them pitted against. White Lies and their would be anthemic pop rock seems quite nervous and fidgety in comparison. 'Unfinished Business' is still a masterclass in jaw-dropping poignancy but elsewhere their set seems to get caught up in the momentum of the event far too easily for anything else to really stand out.

I tentatively make my way over to main stage although I have now come to expect the worst, and the tender histrionics of poor old British Sea Power are glutton for punishment from a sound system that has now hit an all time low after the battering it received at the hands of Rage the night before. It is only when I reach the mixing desk that the sound becomes something even vaguely resembling music, and the sparse crowd wasn't helping. I get right to the front in time for a barnstorming 'Carrion' however, and the remainder of the set, taken largely from excellent new album 'Do You Like Rock Music?' sounds exquisite from my prime vantage point. This being so, it's remarkable that a band who rely so heavily on intimacy are playing at 1.30 on the main stage at Leeds Festival.

The day is kicked into full swing by the irrepressible charisma and playful charm of Santogold. Happily, she is the first dance act in the NME tent to not have her set ruined by technicolour pill children who's idea of 'raving' is jumping up and down like they're at an 8th birthday party. Santogold is saved from this ignominy because she understands the dynamics of electronic music. Her music moves in the right places; she moves in the right places. Everyone is happy. It's the Switch-produced numbers that get the biggest reaction, namely the Switch and Sinden remix of 'You'll Find a Way' and the gargantuan 'Creator' to which we all momentarily lose our minds. I leave the tent fully refreshed.

My attempt to avoid production-line shmindie is thwarted by my inability to resist seeing what all the hype around Black Kids was about. Often the blogosphere can throw up a gem, a diamond in the rough missed by fat cats and popularised from the ground-up by passionate champions of independent music. More often it's a site for black rimmed fashionistas to namedrop between bouts of silent panic that their coke-rimmed fingernail has missed the pulse of the zeitgeist. Black Kids profoundly inspire the latter. The band struggle through the painfully titled "I'm Not Gonna Teach Your Boyfriend How to Dance With You" and it's comparable to watching my baby cousin trying to sing 'Three Blind Mice', except he is a baby. The ramshackle, child-like mess of it all is not 'euphoric', nor is it 'dreamlike'. It is shit. These people are grown adults. At least Pitchfork got the point eventually. Wake up blogland!

Thankfully Los Campesinos! are here to restore parity and potentially save the day from disappearing behind its own embarrassed palm altogether. To say they've come on in leaps and bounds this past year would be an understatement, as anyone fortunate enough to witness their recent headline slot at this year's Indietracks would testify to. Limited to half an hour means we don't get any new material, which for a setting such as this, is pretty much how you'd want it to be. 'Sweet Dreams Sweet Cheeks' is simply euphoric, culminating in the entire band downing tools, jumping atop their respective monitors and singing together in unison. You had to be there, really.

Following a short break for food and refreshments (..ahem.) it's back to the NME tent for Justice, the sophisticated older brother of less-able siblings Digitalism and Simian Mobile Disco. The crowd is enormous and the glowsticks are out in force again, but such is the power of the sound we are spared any circle pits, at least where I was standing. They keep the indie kids happy by mixing in some guitar classics whilst showing of their dance wares with some aplomb. D.A.N.C.E. and 'We Are Your Friends' inspire mass hysteria and singalongs. Everyone leaves looking utterly broken but with the glow of having experienced something memorable.

Gallows frontman Frank Turner occupies the strange space of being in a band that still get kudos from the DIY punk/metal scene, and being #1 on this years NME cool list. How does one deal with that? By leading a tirade against the NME at Leeds Festival, that's how. Apparently it was to do with them saying he called Slipknot 'pussies', which he didn't. No one in the crowd cares though, they are just happy to be chanting 'fuck the NME!' for a good 5 minutes. Who can blame them. Gallows also played some songs, believe it or not, and played them blisteringly. Things really got going with 'Abandon Ship'. Chants of 'Mayday! Mayday!' somehow almost drowning out Turner and the duelling guitars. Gallows live show is so successful because they don't let the intensity drop for a second, and it beggars belief that they still have anything in the tank for the closing salvo of 'In the Belly of a Shark' and 'Orchestra of Wolves'. The gig and the festival come to an end with the customary trashing of equipment, which is unfortunately a theme that continues unabated on the campsite after-hours. Play safe kids.

Likewise tonight's slightly surprising choice of (mid)-headliners. Despite being the final act on the NME stage this weekend, the fact the Manic Street Preachers are sharing equal billing with Gallows (fronting the Lock-Up Stage) and playing second fiddle to overall bill-toppers The Killers is perhaps more to their credit than people first anticipated. Over twenty years in the business and still considered as relevant as ever by both peers and punters alike. Even more gratifying is that they now appear to have finally accepted that their long-distant past means more to the newer acquainted fans than ever before. What this means is that for an hour we get a set that could almost run chronologically like an introduction to each varying stages of the band's development. There's 'Motown Junk' where it all began, 'You Love Us' - the anthem, 'Faster' and 'Of Walking Abortion' now posthumous marks of respect rather than awkward mid-set thrashes, 'A Design For Life' and 'If You Tolerate This.' signifying their ascension into the big time and even a rare run through of Nirvana's 'Pennyroyal Tea' to commemorate their first (and its song's creators last) UK festival appearance in 1992, all of which are welcomed and greeted like old friends at a school re-union. If the Manics of yesteryear represented boredom, isolation and despair, the 2008 version seems to be about celebrating their history and enjoying while it lasts. Which it no doubt will for many years to come if tonight's performance was anything to go by?

A fitting way to end a quite memorable weekend.


Read the review for Friday 22nd

Read the review for Saturday 23rd