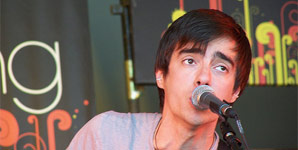 Opening proceedings this fine, gloriously sunny Saturday morning we have two performances that we shall simply call Beauty v The Beast(s). The latter represented by Welsh early-Beasties aping prototype metal trio Future Of The Left, the former in the shape of local songstress Fran Rodgers' gushing nu-folk. Despite 'Wrigley Scott''s constant referencing to sausages and bassist Kelson Mathias trying to bribe us with handfuls of appetising looking sweets, Ms. Rodgers' subtle tones just edge it courtesy of her incessantly pleasant take on The Shirelles 'Dedicated To The One I Love'.

Red Light Company press the bluster button a shade too far into Bono territory while Pete And The Pirates seem to hit all the right musical buttons (Las, Libertines, Interpol) without ever really sounding convincingly like themselves. Thank heavens for Sheffield's Situationists then, who take to the BBC Introducing stage like established veterans and simply leave a trail of passers-by lending an ear and shaking a leg or two at their glitch-pop which comes with the added bonus of possessing more Tunes than Boots the chemist.

Blood Red Shoes are one of those bands whose career is made for such an event as this. Halfway down the bill, mid-afternoon slot, steady but unremarkable, next. Forgettable isn't a word you would ever use to describe Pulled Apart By Horses. Shambolic? Most definitely. Ramshackle? Sounds about right. Chaotic? Quite possibly. Downright Pulsating? You bet. They don't so much play their way through the setlist as attack it hook, line and sinker. A bigger stage awaits next summer, guaranteed. In other words; Pulled Apart By Horses are well spatchcock.


It's early Saturday afternoon, and this year's recipient of the urban-artist-the-middle-class-kids-like main stage slot is Dizzee Rascal. The crowd is encouragingly large compared to Roots Manuva's show of a few years back, when there were barely 3 lines of people. Then again, Roots Manuva would never do a song with Calvin Harris. Unfortunately for Dizzee many of the kids appear to be engaging in what can only be described as 'ironic dancing', which appears to involve one person adopting a gangster pose and their friends collapsing with laughter. Luckily for the rest of us Dizzee's rhyming skills are sharp today, and he delivers relentless versions of 'Jus' A Rascal' and 'Fix Up Look Sharp', with a brutal coup de gras rendition of 'Pussy 'Ole'. Rascal 1 - 0 Metal/indie kids.

Whilst we are all aware of the expression 'difficult 2nd album' fewer of us are familiar with 'difficult 2nd gig' syndrome, which only strikes at duel-site festivals and involves playing a blinder on the first night and then getting so unbelievably totalled that the 2nd gig resembles a Funeral March. Step forward MGMT, who have at least tried to hide their sombre faces and severe lack of nutrients with some far out psychedelic garb. Unfortunately they play with such a lack of gusto that they end up looking like the contents of a post-Woodstock sanatorium. Not that the massive crowd was bothered, mind - they happily played out a 60's peace and unity vibe with their friends and joyfully sang along unfazed to 'Time to Pretend' and 'Electric Feel'. By the time 'Kids' comes about, Ben Goldwasser is so drained that he happily lets the crowd take over completely and more or less just watches them. He ought to consider sharing some of the bands fee with them.

Fellow unknowns a year ago Vampire Weekend haven't quite had such a critical rollercoaster, or at least in the live arena at any rate, and it's easy to see why as their last UK festival appearance of the summer is reeled off with some aplomb. Without wanting to retread all the old Strokes if they'd recorded 'Is This It' in Paul Simon's Graceland accusations, there really is something quite appealing about hearing some middle American expressing dissatisfaction with his all ('Cape Cod Kwassa Kwassa'). Future headline status beckons.

The Saturday night main stage combo of Queens of the Stone Age and Rage Against the Machine promised much and, at least in the early stages, delivered very little. There was quite a crowd for Queens of the Stone Age and a real sense of anticipation in the air. This soon evaporated yet again due to terrible sound problems, completely wasting the shock and awe intention of opening with 'No One Knows' and 'Feel Good Hit of the Summer'. Even at the front it was like listening through a pocket radio. Chants of 'turn it up!' continued right throughout the night. Also not helping was Josh Homme, who seems to think that boasting about drinking since 7am and looking bored and resigned during the whole set somehow makes him the beacon of all rock and roll. Although to be fair to them they appeared to be playing really well, but the audience was none the wiser because nothing could be heard.

Unsurprisingly the biggest crowd of the weekend was for Rage Against the Machine, and the preceding sound problems mattered nought to this audience, most of who weren't old enough have seen the band before. The sheer amount of rage merch all over the place (shirts for sale at the bargain price of Â£35) suggests two things. 1) They are still popular with the 'kidz'. 2) 'Das Capital' and 'The Anarchists Cookbook' are no longer priorities on the RATM reading list. Still, if were all being honest we are only really here for the amazing riffs, so why shouldn't they be? They play to the rapturous crowd with an unbelievable opening of 'Testify', 'Bulls on Parade' and 'People of the Sun'. The sound is still far too low but people seem far more willing to get on with it and have a good time than during QOTSA, which is something to do with the fact that everyone can see Rage are playing an absolute blinder. There's an equal share from across all 3 albums as well as 'Renegades of Funk', and the die hard fans are treated to a stellar version of 'Down Rodeo'. The closing double whammy of 'Freedom' and 'Killing in the Name' brings the house down and even the masses and the back who can barely hear anything get involved. This is how it's done.


Read the review for Friday 22nd

Read the review for Sunday 24th