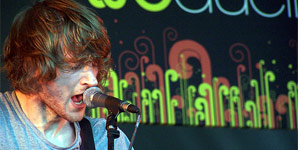 Leeds Festival is once again upon us, and the predicted deluge has safely stayed away, at least for the time being. If one could be critical about this years line up it's that there is too much reliance upon rock behemoths Metallica, Rage Against the Machine, Queens of the Stone Age and erm. Tenacious D at the expense of the rest of the line up. Every other person is in a Che Guevara t-shirt and it does seem that there was a lack of investment in the body of the festival, but nevertheless I begin the day trying to avoid Plain White T's and Avenged Sevenfold to seek out a few surprises amongst the non-chart bothering bands on the BBC introducing stage.

Eureka Machines belt out their razor-sharp power pop to a large and appreciative crowd. A combination of good natured vocalist Chris Catalyst, tight Wildhearts style riffing and some gliding three-way harmonies Weezer would be proud of keep the crowd onside for the duration. "The light at the end of the tunnel, is the light of an oncoming train" warns Chris Catalyst in their set closer; a caveat that would clearly be lost on anyone spending their time watching Mindless Self Indulgence on the main stage.

Dinosaur Pile-Up are the Leeds buzz-band of the moment, and with good reason. The riffing is again tight but in the more sober, math-vein of Shellac or Helmet, while retaining a pop sensibility through some sweet chord changes and a clear sense of lyric melody. They make an almighty noise for a three piece, but their real talent lies in knowing when not to play. The rhythm section play in simple, straight lines when the riff needs to be accentuated, and all three members know when to attack with ferocity. The 'grunge' tag is often reeled out for these guys, but it is slightly misleading. They have more in common with the bands that came just before grunge, such as the Meat Puppets, Dinosaur Jnr and The Pixies - they share that rare ability allow great songs to shine through the noise. This band will be playing on a different stage next year.

So Feeder might not be everyone's cup of tea, and perhaps rightly so, but for every asinine AOR ballad there's always a double whammy of a retort in the likes of 'Buck Rogers' and 'Just A Day'. Come to think of it, our only complaint of the day regarding Feeder is that their set seemingly gets cut short by 15 minutes or so. For what.this.?


A short walk over to the NME tent and I'm immediately struck by the number of excited pre-pubescents dressed like Cindy Lauper without any semblance of irony. This could mean only one thing. No, not an impromptu rendition of 'Time After Time' and 'Girls Just Wanna Have Fun', but the happening Nu-Rave of Hadouken! Their appearance is billed as a 'homecoming' because they spent three years at Leeds University, but this band couldn't be more Shoreditch if they had a picture of Nathan Barley as a backdrop. They put in a sterling effort which has the desired effect on the crowd, who copy singer James Smith's technique of jumping up and down like he's having a tantrum. I had expected dancing, but soon realise that it is impossible to dance when the only dynamic in the music is a badly produced synth that goes high in the chorus (wooooOOOOO!!!) and low in the verse (WOOOOOoooooooo). The nadir of their set is a cover of 'Breathe' by The Prodigy which exposes the shortcomings of this approach to dance music for all to see. I would have been more comfortable watching Mike and the Mechanics cover 'Smells Like Teen Spirit'. Clearly the kids are happy with this dynamic, it's obviously working, but it's impossible to see any mileage in it.

The next attempt to bring dance music to the suburbs is made by Pendulum, who have utterly cornered the halls-of-residence 'pills honeymoon' market. The world is littered with people who now attempt to be taken seriously as dance music aficionados who 'used to like Pendulum' and now listen to commercial dub step and drum 'n bass. There is something endearing about them, they are like arm-bands for kids who are attempting their 10m electronic music badge. However, for anyone who was presented their 200m Photek freestyle gold medal by Nicky Blackmarket in 1997, they are enough to make you cry. They adopt the same woooooOOOO! WOOOOoooo! trick as Hadouken!, but about 50 times louder, amidst the backdrop of some 'rock guitars', and each song to the same thumping, thoughtless D 'n' B rhythm. One song is literally indiscernible from the next. I see some of the worst pill casualties in 15 years of festival-going and to top it all off, a massive circle-pit develops next to me, complete with fists and kicks. Grooverider must have been turning in his South East Asian prison.

Yep, brace yourselves for the worst live experience on earth. It's not big; it's not clever, just abominably awful. Tenacious D might think they have a sense of humour and a few tunes to much but to these ears they sound like two drunk uncles at a wedding reception telling the same not-funny-the-first-time joke repeatedly ad nauseam. Now, OFF.

Or we're out of here first. Legging it over first to the NME stage for Conor Oberst's uninspiring self pitying, several hails of feedback from the adjacent Festival Republic tent signal the arrival of Glasvegas and a swift about turn from yours truly. Not for want of over-repeating oneself, the black-clad quartet pull off another majestic festival performance that leaves the tent bellowing the chorus of 'Go Square Go' long after they've departed the stage.

As for The Last Shadow Puppets the stench of anticipation is probably emanating from messrs Turner and Kane's collective trousers. Sure, they've appeared on stages bigger than this with their other outfits but pulling this off would be the icing on the cake. Professional and sophisticated from start to finish, their set perhaps lurking just a tad on the formulaic side, The Last Shadow Puppets don't disappoint, even if they do drag on a little bit.

Talking to people before Metallica came on; the general consensus was that we'd all have to cringe through a load of new stuff inspired by self-help and rehab, which we'd just about tolerate because of the two or three classics they'll play at the end. The prediction looked like coming true after a slightly lacklustre beginning of 'Creep' and 'Fuel'. James Hetfield looks so battle-scared and weary that he now resembles a carving, hewn from the dying rock of aged thrash metal and Lars Ulrich seems to enjoy running around between songs more than actually playing nowadays. It doesn't look good, but just as I was about to resign myself to politely watching a band beyond their twilight, they get things moving with a volley of thrash classics: 'Ride The Lightening', 'Master of Puppets', '.And Justice For All' and 'Harvester of Sorrow' all get the 30-somethings moshing furiously and nodding even more furiously between songs. The band respond to the crowds approval and play with an energy that belies their years, rewarding their audience with 'Nothing Else Matters', 'Sad But True', 'One' and 'Enter Sandman' in succession. Even the two new songs they play sound like a return to form, with a Master of Puppets fast thrash feel. They end with 'Seek and Destroy' much to the metal aficionados approval. They comfortably exceed everyone's expectations and even manage to get a good sound out of what is a terrible speaker system - a triumph.

Read the review for Saturday 23rd

Read the review for Sunday 24th