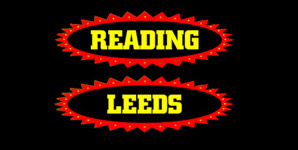 At Leeds Festival, wondrous as it is, there's little else to do apart from watch music and eat rather underwhelming fast food, so unless you are a major comedy and spoken word fanatic, you need a few bands to blow you away. This year's line up received a fair amount of criticism, and there were some strange scheduling decisions on the main stage, but there was certainly enough diamonds in the rough to ensure that you could always find something engaging.

The unremitting drizzle that stayed with us for the whole of Friday meant that the tent stages became instantly popular, and that's where we began with DANANANANAYKROYD on the Radio 1/NME stage. They are a curious, if rather infectious proposition that blend their hardcore and math influences with a hint of Scottish power-pop. At points I could even hear the pure pop of Prefab Sprout - they'll probably hate that, but there you go. Their two front men were suitably energetic and exploded out of the box, leaving a trail of crowd participation and general merriment in their wake - it was a very fine start. They were followed by FUCKED UP, and to be honest I have always struggled to see past the gimmick. Don't get me wrong - I enjoy the straight up rock 'n' roll and Pink Eye's rousing motivational speeches, but there is too much of a disconnect between Pink Eye and the band. At one point there was some self-help diatribe about how no one should make you feel bad about your naked body - a worthy sentiment, but the last time I checked Pink Eye wasn't a solo artist. Too much cult of personality - not enough of a united front.

FRANK TURNER brought some much needed sparkle and honesty to proceedings on the main stage, with most of the highlights from his set coming from 2008 album Love Ire & Song, in particular singles "Reasons Not To Be An Idiot", "Long Live the Queen" and a beautiful version of set-finishing "Photosynthesis". Recent single "If I Ever Stray" induced much swaying and beer swilling, with its "1-2-3-4" drinking song refrain. Turner also played a secret gig on the Lock Up Stage later in the day, with more of a focus on the drinking song side of his armoury, a highlight of which was Chuck Ragan from Hot Water Music joining him on stage for "The Road".

The rain was really starting to set in now, and both FRIENDLY FIRES and INTERPOL did little to cut through the rather stilted atmosphere that was beginning to grow. The latter was a particularly damp squib, as there seemed to be much excitement in the crowd, with only "Evil" making any sort of mark. You could feel the audience interest ebb away as the set came to its forgettable conclusion. Fortunately ELBOW kicked us out of our early evening slump with a rousing set, focusing solely on their last two albums - their 2008 breakthrough "The Seldom Seen Kid" and 2011's "Build a Rocket Boys!" They were helped out by a much improved sound quality than the previous few bands, coupled with the fact that they are one of the few big indie bands that have a true grasp of dynamics and instrumentation. From beguiling opener "The Birds" to staple festival sing-a-long "One Day Like This", Elbow had the crowd in the palm of their hands.

There aren't many bands that could get away with playing a single album from start to finish in the headline slot at Leeds/Reading, but MUSE managed it, sort of. There were some stand-out moments from their full rendition on Origin of Symmetry, particularly "Hypermusic", which they hadn't played for nearly 10 years, and hardcore-fan-favourite "Microcuts". It had been a long, wet day though, and the set really kicked into gear once they waded into their greatest hits. The back-to-back trinity of "Supermassive Black Hole", "Hysteria" and "Time is Running Out" had the crowd in raptures, and it was a strong finish to the day with space-rock epic "Knights of Cydonia". We were soaked but happy, and looked forward to a dryer experience over the weekend.

There was sun and wind in equal measures as I walked on to the site, and I was looking forward to a more dance-orientated line up today, punctuated by a trip down memory lane with some of the punk, indie and nu-metal bands of my childhood. We started out on the dance stage with intelligent dub-steppers MOUNT KIMBIE, who were playing far too early in the day. Their sophisticated approach to beat making, punctuated by a deep understanding of dubstep, two-step and French house rhythms must be difficult to get across even when played to a room of chemical smiles, but 1.45pm at Leeds Fest must have been a rather thankless task. Still, I thoroughly enjoyed it, even if the band themselves may have not. The tent filled up quickly for CRYSTAL FIGHTERS, who are a mish-mash of Spanish melodies, Gogol Bordello-style punk inspiration and dance rhythms. This seemed to sit very well with a noticeably young audience, but the sound was awful and I found them a difficult act to watch on stage. As well as a spindly, broken-voiced lead singer, who looked like the sort of man that would try it on with your girlfriend when travelling, they had a second female singer, whose voice and stage presence just wasn't strong enough to justify her inclusion. There were a few thousand who disagreed with me though, and most were grinning ear-to-ear by the end.

Now it was time for the first nostalgia trip of the day, as me and an army of my mates headed to the main stage, where we were hoping to live out our teenage dreams to DEFTONES and THE OFFSPRING. It was a disappointingly sparse crowd for Deftones, who employed the risky strategy of opening with two of their biggest tunes, much to my delight. "Be Quiet and Drive (Far Away)" and "Shove It (My Own Summer)" sent shockwaves of excitement through the people in attendance who actually new any of the songs. The rest of the set focused on their classic 2000 album White Pony and last year's comeback Diamond Eyes, with songs from the former predictably getting the loudest cheers. They ended on a high with "Change (In The House of the Flies)" and "Passenger" featuring a guest appearance from Tim McIlrath of Rise Against, who had appeared earlier in the day. People flocked to the main stage for The Offspring, whose accessible punk songs span at least a couple of generations. They kicked off with the speed-punk of "All I Want" and kept reeling off the hits, which built into the crescendo of "Pretty Fly For a White Guy", "The Kids Aren't Alright" and "Self Esteem". Although most of the people nearby (including me) got distracted by a full-on mud wrestling tournament with around 20 competitors, it was all part of the fun.

A short beer/gin/vodka/whisky break was followed by a trip to the Festival Republic stage to see 2005 disappearing act TOM VEK, who looked set to become a festival staple back when Bloc Party and Razorlight were heading up the London scene, but he then disappeared completely until the release of his second album this year. He still has his completely awesome band, and it's still refreshing to see an indie act with such a thorough understanding of beats. The new songs sounded strong, and classics like "C-C (You Set the Fire in Me)", "If You Want" and "I Ain't Saying My Goodbyes" were delivered with the energy of man who has never been away. Things were getting hazy by the time DIGITALISM came on, but I know that I danced my proverbial off and the atmosphere in the tent was electric. They get the award for most fun act of the festival, even if two days of drinking was taking its toll by this point. Time to prepare for tomorrow with water, vegetables and berocca.

The weather finally took a backseat on the Sunday of Leeds Festival, with a good deal of sunshine allowing everyone to concentrate solely on music. Now, maybe I'm too old for EDWARD SHARPE AND THE MAGNETIC ZEROS but I can't be the only person who cringes every time I hear soul music put through an indie filter. Surely this takes all the soul out of proceedings? Yes? No? Well, in any case their viral internet sensation "Home" went down a storm; the rest of it I could take or leave, well mostly just leave. MADNESS pulled a crowd that could only be rivalled by Muse and Pulp, but the very dodgy sound combined with a band clearly going through the motions meant that many people had left before the end. I did have a few little moments to "Our House" and "It Must Be Love" though.

I'd been excited about finally seeing GLASSJAW again for months, and they didn't disappoint. Although many may have been disappointed that there was no "Cosmopolitan Blood Loss", "Siberian Kiss" and hardly anything at all apart from songs from their recent "Our Colour Green" EP, the whole thing was delivered so flawlessly that they got away with it. It was good to see Daryl Palumbo looking fit and healthy following 10 years of problems with Crohn's disease. Another blast from the past was RIVAL SCHOOLS. I had seen them at the height of their "Used for Glue" success at Leeds Festival 2004, and they seemed like a broken band, bored and probably frustrated about having to tour for so long on the back of one song. This time around, however, they looked thoroughly invigorated with Walter Schreifels flying around the stage as if he was still smashing it up in his classic post-hardcore band Quicksand. The new songs sounded fantastic, but it was the seminal songs from United by Fate that really caught the imagination, especially the aforementioned "Used For Glue" and "Good Things". Out of the bands I felt nostalgic about, Rival Schools got closest to the sweet spot, apart from one band

That band was PULP. After they played, I couldn't find anyone who didn't agree that they were the best band of the weekend. Something that immediately set them apart was the amazing quality of the sound compared to every other act on the main stage, and of course Jarvis Cocker's quite stunning verbal dexterity between songs. It was hit after hit after hit. To give you a flavour, the first three songs were "Do You Remember The First Time?", "Pink Glove" and "Razzmatazz". Where do you go from there? Well, you drop in "Disco 2000", "Sorted for E's and Whizz", "Babies" and "Misshapes", then bring on Richard Hawley from a show stopping rendition of "This is Hardcore". Oh, and then you finish on "Common People". It left me and my friend breathless, and I really couldn't think of a better way to spend my last few hours at Bramham Park. Here's hoping for a full Pulp UK tour, and that Leeds Festival makes a few better decisions with the line up and scheduling next year. I can't wait.