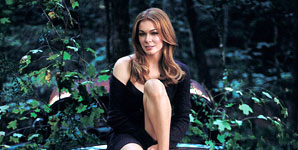 LeAnn Rimes returns with the single 'Nothin' Better To Do', the first to be taken from her forthcoming album 'Family'.

The single's video captures LeAnn as you've never seen her before. Set in the 1930's it was shot in a real prison, the Old Tennessee State Penitentiary (Tom Hanks 'The Green Mile'). Some scenes were shot on a vintage hand cranked movie camera to help create the period and drama of the video. LeAnn looks stunning and shines as she performs in a Chicago-esque dance routine. 'Nothin' Better To Do' will be released on September 24th on London / Curb Records with 'Family' following on October 8th.

Produced by LeAnn's long-term collaborator Dann Huff, 'Nothin' Better To Do' combines pure-pop with a playful country edge and represents LeAnn's most infectious single since 'Can't Fight The Moonlight'.

Country: Portraits Of An American Sound