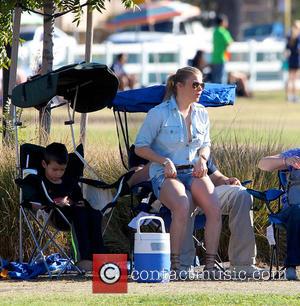 Singer Leann Rimes has taken her marriage to Eddie Cibrian to new heights by jumping out of a plane to raise money for charity.

The Blue hitmaker and her actor husband signed up for the tandem skydiving event at Lake Elsinore, near Los Angeles, on Monday (11Nov13), strapping themselves to professionals as they leaped out of an airplane.

The stunt was part of The Wings of Inspiration Veteran's Day Skydiving Event, which aimed to raise cash for wounded troops.

Taking to Twitter.com after the jump, Rimes wrote, "Wow, I just jumped out of a freaking plane!!!!!!!!! Totally wiped out from all the excitement today! In sweats, on the couch, chillin w/ (with) 2 kiddos (sic). It's gonna take everything I've got to get up."

The couple was also joined by Tv host Mario Lopez, who also jumped out of the plane with an instructor.