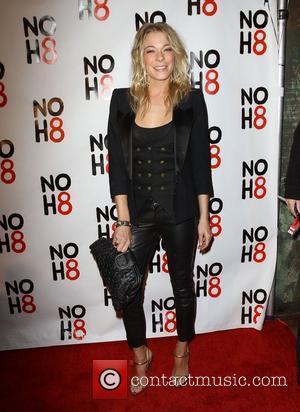 Leann Rimes and Eddie Cibrian clearly aren't too keen on the winter months, escaping to the heat of Cabo San Lucas in Mexico for a festive holiday. The bikini-clad singer, 26, and her actor beau took to the high seas for a very public display of romance this week, reports the UK's Daily Mail.
Often photographed frequenting the finest beaches in her bikini, this time the country star opted for a white creation with bejewelled detailing. It's been a tumultuous year for Rimes, who has come under fire for her increasingly skinny frame. Several months ago, she was approached by a diner in a Chicago restaurant who told her "You need to eat something". Furious at the incident, LeAnn took to Twitter to tell fans, "How dare someone come to me at a table w/ the boys and tell me I need to eat something". The day before her yacht trip, the singer and Eddie "couldn't keep their hands off each other" as they "treated onlookers to a steamy make-out sessions" whilst enjoyed cocktails on their balcony at the Cabo Hotel. Later, after a romantic horse ride, Rimes tweeted, "Wow, horseback riding on the sand was magical! Gorgeous day already. Very spiritual morning".
The famous couple got together after falling in love on the set of a movie - while Eddie was still married to ex-wife Brandi Glanville. Earlier this week, the two women were spotted awkwardly sitting close to each other at Eddie and Brandi's kids soccer game in Los Angeles.