Leann Rimes Gets The Backing Of Husband Eddie Cibrian

Leann Rimes' husband Eddie Cibrian has backed his wife after criticisms about the country artist's figure. 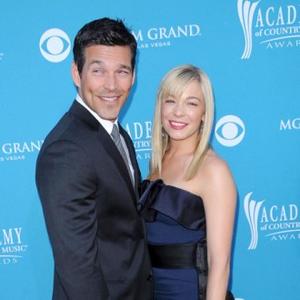 Leann Rimes has been backed by husband Eddie Cibrian after criticisms about her figure.

The 'Playboy Club' star - who married the country singer earlier this year - says the 29-year-old beauty eats "pretty healthy" and even consumes more than he does on occasions.

Speaking on 'Access Hollywood Live', he said: "It bothers me because, obviously, I know she's healthy. She eats more than I do sometimes.

"She's just a very [conscientious] eater, as far as what she eats. She eats pretty healthy, but she works out pretty hard too and she actually takes pride in the way she looks and it's a shame that people will jump on the bandwagon just because she is fit. And she's far from unhealthy."

Eddie believes there is always an "unflattering" look when people take photographs, so LeAnn's figure should not be judged from a group of images.

He added: "Whenever you get a picture taken of you, there's always an angle that looks unflattering for anybody and it's unfair to use those pictures as the basis of the way that you actually really look."