Leann Rimes claimed she cheated on her ex-husband Dean Sheremet with her 'Northern Lights' co-star Eddie Cibrian after deciding she needed to put herself first to be truly happy. 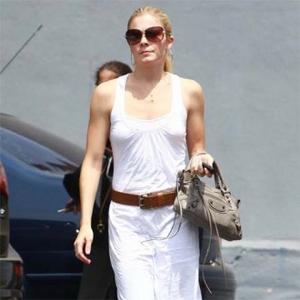 Leann Rimes cheated on her husband because she needed to put herself first.

The singer-turned-actress - who left her now-former husband Dean Sheremet in July 2009 after and falling in love with her 'Northern Lights' co-star Eddie Cibrian - admits her actions were selfish, but she needed to discover what would make her happy.

She said: "I feel like I'm just now finding myself. I've always been one of those people who takes care of everyone else-and their needs-first. This past year, for the first time ever, I put me first. I'm sure some people are thinking that I was totally selfish, but the truth is, there are times in your life when you have to be selfish in order to find out what truly makes you happy."

The 28-year-old singer - who now lives with Eddie and his two young sons Mason and Jake, who he has with his soon-to-be ex-wife Brandi Glanville - admits she doesn't think it was "right" to have an affair, but that her eight-year union to Dean had problems before she met Eddie.

She explained to Shape magazine: "My relationship with Dean was great, but ultimately it wasn't a fulfilling marriage for either of us. We grew apart.

"I understand why people are disappointed In Me, especially since I grew up as America's sweetheart. I think any relationship is hard to get out of, and I don't think the way I did it was right. I truly believe there are lessons in it for me to learn. Cultivating strength from rough situations is the most important thing. After going through this, I know I can face anything."

Meanwhile, Brandi has accused LeAnn of "bad parenting", after no one contacted her when Mason needed hospital treatment after apparently slipping over in the singer's home.

She said: "All I know is I didn't get a phone call. Poor choice. Bad parenting.

"I don't know how exactly it happened, but Mason told me LeAnn had oil on her hardwood floors and he fell."

However, the youngster is believed to be doing well now.

A spokesperson claimed it was a "minor slip."

They added: "Eddie and LeAnn were with him the whole time, and he is all smiles now".