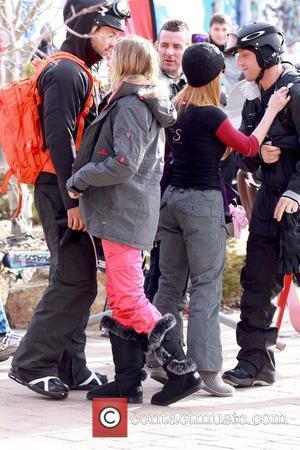 Picture: LeAnn Rimes says goodbye to her husband Eddie Cibrian LeAnn Rimes wearing ski pants and warm boots as she walks with a friend while on...

Country star Leann Rimes has helped pull in more than $1 million (£625,000) for a children's charity by auctioning a private concert.
One guest at the Naples Winter Wine Festival in Florida last weekend (28-29Jan12) bid a staggering $1.2 million (£750,000) to have the Blue hitmaker sing at an exclusive show, which will be accompanied by dinner prepared by Top Chef cook Tom Colicchio.
Vintage and rare wines also went under the hammer, and one set of six 2010 bottles fetched a massive $550,000 (£344,000).
A total of $12.2 million (£7.6 million) was raised for the Naples Children & Education Foundation - and Rimes was thrilled to be involved with the event.
In a post on her Twitter.com page, she writes, "So happy to be a part of this!!!!! I can't wait for the food and wine! Fun night to perform."