'Glee' actress Lea Michele is rumoured to have been lined up for the part of Jennifer Grey in the remake of 1987 film 'Dirty Dancing'. 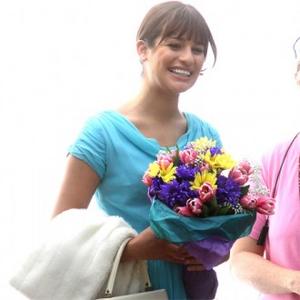 Lea Michele is reportedly being lined up for the remake of 'Dirty Dancing'.

The 'Glee' star - who is set to leave the E4 show at the end of next season - has been rumoured for the role of Frances 'Baby' Houseman, which was originally played by Jennifer Grey, while Derek Hough could be set to star as Patrick Swayze's character Johnny Castle, according to MovieWeb.

But the 24-year-old beauty could face competition from pop acts Miley Cyrus and Selena Gomez - who is currently dating teen heartthrob Justin Bieber - because they have also been linked with the role of Baby.

Kenny Ortega - who directed Michael Jackson's 'This is It' and choreographed the original 'Dirty Dancing' in 1987 - is set to helm the forthcoming movie, which has seen 'Glee' actor Matthew Morrison and 'Gossip Girl' hunk Chace Crawford considered for the part of Johnny.

The movie is set to arrive in 2013, with official casting announcements expected soon.